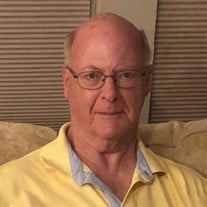 David Lafrenz, 72, of Columbia, Missouri and formerly of Oskaloosa passed away Thursday, September 5, 2019, at Boone County Hospital in Columbia, Missouri David Edward Lafrenz, son of Harry and Elaine Anna (Maas) Lafrenz, was born August 13, 1947 in Waterloo, Iowa. He was raised in Hudson, where he graduated high school in 1965. David began his college career at the University of Northern Iowa, and it was there that he met his future wife, Karen, on a blind date. David finished his undergraduate studies at Arizona State University earning his Bachelors of Science degree in 1971. He furthered his education in the Ph. D program at the University of Iowa. After earning his doctorate, he trained as a Postdoctoral Fellow at Stanford University from August 1978 to December 1980. He then served as a Howard Hughes Fellow at Stanford University School of Medicine from January 1981 to December 1982. David returned to Iowa in 1983; over the next six years he served as a Research Microbiologist, Director of the Animal Research Facility, and was an Adjunct Professor for the Department of Medicine at the Iowa City Veterans Hospital and the University of Iowa School of Medicine. David furthered his career as a Research Microbiologist at Truman Memorial VA Hospital from August 1988 to September 1996; there he was Director of Flow Cytometry and Associate Director of Cell and Immunobiology Facility at the University of Missouri School of Medicine. David opted for a career change in 1995 when he accepted the position of Vice-President of Lafrenz Motors in Oskaloosa, Iowa, which included such capacities as Controller, Director of Fixed Operations and Sales. He returned to the University of Missouri School of Medicine as a Research Specialist in 2007. While working at the University, David purchased Pure Audio with his son, Judd, a custom home and commercial sound and video sales and installation business. David remained active in research until his retirement in December 2017. David married his college sweetheart, Karen Rae Hall, June 25, 1971, at Grandview Methodist Church in Dubuque. His family remembers him as having a passion for his career, yet always knowing that his family was his top priority. He never lost his affinity for cars and was a member of the Missouri Corvette Club. He loved to hunt with his sons; he was a meticulous wood-worker and crafted several grandfather clocks as gifts. David had an imposing physical presence, yet a kind and tender personality. David is survived by his wife, Karen; his sons and daughters-in-law: Jarod and Kim Lafrenz and Judd and Alicia Lafrenz, all of Columbia; four grandchildren: Elsie, William, Nolan and Kevin; and siblings: Jim Lafrenz of Orlando, FL, Cynthia (Dwight) Miller of Harrison, AR, Nile Lafrenz of Pleasant Hill, IA and Brenda Crane of Oskaloosa. In addition to his parents, David was preceded in death by a sister, Jean Ann; a nephew, Adam Lafrenz; and his cocker Spaniel, McKenzie. Funeral Services for David will be held at 10 a.m., Wednesday, September 11, 2019, at Langkamp Funeral Chapel with Pastor John Nelson of Central Reformed Church officiating. Burial will be at 1 p.m. at Hudson Cemetery in Hudson, Iowa. Visitation will begin at 11 a.m., Tuesday at the funeral chapel; the family will greet visitors from 4-6:30 p.m. Memorial contributions can be made to the Shriners Hospital for Children or The National Corvette Museum in Bowling Green, Kentucky.

The family of David Edward Lafrenz created this Life Tributes page to make it easy to share your memories.

David Lafrenz, 72, of Columbia, Missouri and formerly of Oskaloosa...

Send flowers to the Lafrenz family.