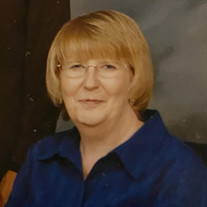 Deborah Wald. 66, of Oskaloosa, passed away Friday, November 13, 2020, at MercyOne Medical Center in Des Moines, Iowa. Deborah Sue Wald, daughter of Calvin LeRoye and Elaine Kay (Provin) Musgrove, was born November 16, 1953, in Oskaloosa, Iowa. Her father’s employment took the family to Pierre, SD, in 1962, and she graduated from Theodore F. Riggs High School in 1971. She married Clayton Wald in 1973, and to this union, two sons, Richard and Scott, were born. They later divorced. Through the years, Deb worked as a secretary and a bookkeeper in numerous areas of the country. She returned to Oskaloosa in 1993 and was employed as a bookkeeper at Interpower. Before retiring one year ago, she was the smiling face that greeted customers at Jiffy Convenience Store for three years. Deb was a member of the Resurrection Lutheran Church in Pierre; she raised her sons in that church, and her faith was very important to her. History was something that Deb enjoyed, and she took a particular interest in studying the Holocaust. She had an extensive elephant collection; she also enjoyed bowling and playing dice. Deb was a member of the D.A.V. Auxiliary and served as the South Dakota State Commander. One year, she and her father, Calvin, both served as Commanders; he in the D.A.V. and she in the D.A.V. Auxiliary. Her family includes her sons: Richard (Hope) Wald of Oskaloosa and Scott (Christie) Wald of Laramie, Wyoming; three grandchildren: Brayden and Mikayla Wald and Madison Miller; two great-grandchildren: Ben Miller and Zoey Fleming; her mother, Elaine Musgrove of Oskaloosa; a sister, Kate (Oscar) Ortiz of Leon and a brother, Kevin (Kim) Musgrove of Otley. Deborah was preceded in death by her father and her grandparents: Carl and Ruby Provin, Bill Musgrove, Alberta Van Polen, and Bob Van Polen. As was her wish, Deborah’s body has been cremated. A Celebration of Life Service will be held at a later date. Memorial contributions can be made to her family and will be designated later. Langkamp Funeral Chapel & cemetery is entrusted with Deborah’s final arrangements.

The family of Deborah Wald created this Life Tributes page to make it easy to share your memories.

Send flowers to the Wald family.