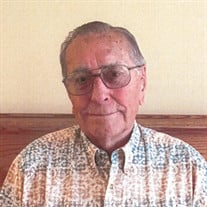 Delbert Brackney, 94, of Oskaloosa, passed away Monday evening, October 18, 2021, at Mahaska Health Hospice Serenity House in Oskaloosa. Delbert Owen Brackney, son of Owen Harvey and Blanche (Carpenter) Brackney, was born October 24, 1926, in Oskaloosa. Following his 1944 graduation from Oskaloosa High School, he enlisted in the army on February 2, 1945. He served until November 15, 1946, and returned to Oskaloosa, joining his father at Brackney’s Tin Shop. August 1, 1948, Delbert married the love-of-his-life, Marilyn “Marty” Perry, at the First Christian Church. Delbert eventually transitioned his father’s tin business to Brackney Heating and A.C. He owned and operated the shop until his retirement in 1991. After retiring, Delbert became involved in local politics and served as a city councilman from 1992 through 2001. Delbert was a lifelong member of the First Christian Church and a longtime member of the American Legion, where he was an active member of the Honor Guard. He played trumpet in the City Band for many years. Delbert was an avid sports fan of the Chicago Cubs, the Iowa Hawkeyes, and the Oskaloosa Indians. Attending the Drake Relays was always a family favorite and then became a yearly tradition with friends. For over 50 years, he served as an official at the Osky Relays, and he umpired Little League games for many years. He and Marty were the first recipients of the “Fan of the Year” award of sports by the Oskaloosa School System. His family includes his children: Jeff Brackney of Oskaloosa, and Mary Beth (Merle) Lyons of Le Mars; seven grandchildren: Kim Hopkins, Matt (Shannen) Hopkins, Kelli Brackney, Stacey (Mike) Fritz, Becca (Victor) Freeman, Jeromy (Emmy) Lyons and Jennifer (Adam) Burns; and 15 great-grandchildren. In addition to his parents, he was preceded in death by his wife, Marty, on September 5, 2008, and a daughter, Linda Hopkins, on Dec. 12, 2006. Funeral Services for Delbert will be held at 10:30 a.m., Saturday, October 23, 2021, at Langkamp Funeral Chapel, with Rev. Molly Goodrich officiating. The burial will be in Forest Cemetery with Military Honors by the Oskaloosa Honor Guard. Visitation will begin at 11 a.m., Friday, at Langkamp Funeral Chapel; the family will greet visitors from 4-6 p.m. Friday evening. Memorials can be made to the First Christian Church.

The family of Delbert Brackney created this Life Tributes page to make it easy to share your memories.

Send flowers to the Brackney family.