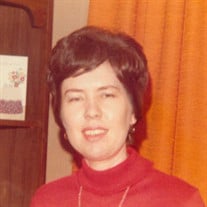 Diana Provenzano, 83, of Grinnell and formerly of Oskaloosa passed away Wednesday, September 9, 2020, at the Grinnell Health Care Center in Grinnell. Diana Laura Provenzano was born April 8, 1938, in Oskaloosa to Walter and Lucile (Whitlock) Gravitt. She was a 1956 graduate of Oskaloosa High School. In 1958, Diana married Frank Provenzano and they made their home in Illinois; to this union, three children were born. They later divorced. In 1973, Diana returned to Oskaloosa with her children. She was a member of the Jolly Girls Club and loved being a homemaker and caring for her children. She also enjoyed listening to Big Band Music and all Rogers and Hammerstein Productions, taking walks, shopping, working in her flower and vegetable gardens, and the company of her cats and dogs. Her family includes her mother, Lucile Gravitt, her sons, Vince and Ray Provenzano, her sister, and Linda Edwards, all of Oskaloosa. Several cousins and nieces and nephews also survive her. In addition to her father, Diana was preceded in death by her daughter, Valerie. A funeral service will be held privately for Diana. Burial will be in Old White Cemetery in Oskaloosa. Visitation will begin at 11 a.m., Sunday, September 13, 2020, at Langkamp Funeral Chapel; the family will greet visitors from 1-3 p.m., Sunday. Memorial contributions can be made to Stephen Memorial Animal Shelter. According to the rules put in place by the Iowa Department of Public Health, proper social distancing and proper personal protective equipment are advised for attending this public event.

The family of Diana Provenzano created this Life Tributes page to make it easy to share your memories.

Diana Provenzano, 83, of Grinnell and formerly of Oskaloosa passed...

Send flowers to the Provenzano family.