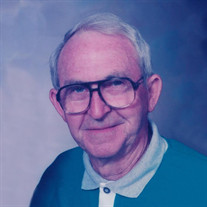 Donald Mc Creery, 88, of Pella and formerly of Oskaloosa passed away Monday, March 16, 2020, at The Cottages in Pella, Iowa. Donald Dean Mc Creery, was the son of Lote and Dollie (Pearson) Mc Creery, was born October 2, 1931, at the home of his parents in rural Fremont, Iowa. Donald attended a country school his father helped build before moving with his parents to Des Moines, where he attended school through the 8th grade. During the war years, the family moved to Washington State, where his mother worked in the shipyards. Donald had fond memories of living in the Seattle area attending movies with new friends. After the war, Donald returned to Oskaloosa, where he lived with his sister and brother-in-law. While living with them, he met their neighbor girl, Betty Ellen Edwards. They married April 3, 1949, in Davenport, Iowa. Donald and Betty soon made their home in Des Moines, where Donald attended trade school to learn radio and T.V. repair. When the Korean War began, Donald enlisted in the Marine Corps on February 14, 1952, in Des Moines. He served over five months in Korea and was discharged on February 8, 1954. Donald returned to Iowa and decided to pursue a career in electronics. He joined the Burlington Local Lucky 13 Union of the I.B.E.W. and served an apprenticeship. He soon became a journeyman electrician, and his work took the family to numerous states including, Washington, Arizona, and Texas, with Oskaloosa, always being their home base. Donald retired in 1993 after serving 30 years as a journeyman. He and Betty enjoyed 20 years of wintering in Tucson, Arizona. Donald was always mechanically inclined; after his retirement, he loved welding and building. Don was happiest when he had a repair project that required some mechanical know-how. The love of movies he acquired as a teenager never left him, and he always enjoyed a good western. Donald continued his membership in the I.B.E.W., and he was a life-long member of the V.F.W. His family includes his daughters: Rhonda Hart of Oskaloosa, Sonja DeRose of Kansas, City, Missouri, and Tonia Mc Creery of Altoona; eight grandchildren: Richie Hart Jr. of Oskaloosa, Bridget (Dan) Woodworth of Oskaloosa, Lesa DeRose (Ronda Law) of Kansas City, Geoffrey DeRose of Kansas City, Jeremy DeRose of Kansas City, Christina (Joey) Le Clair of Raytown, Missouri, Elizabeth (Gene) DeRose-Moses of Kansas City, and Samantha DeRose of Underwood, Minnesota. In addition to his parents, Donald was preceded in death by his wife, Betty, on May 28, 2016, and his siblings: Holly, Lawrence Mc Creery, Freeda Benscouter, Wanda Warner, Wayne Mc Creery, Daniel Mc Creery, and Madge Goughnor. Private family services will be held on Thursday, March 19, 2020, at the Langkamp Funeral Chapel with Pastor Elaine Jones of Wesley Life Hospice officiating. Burial will be in Abel Cemetery near Hedrick, Iowa with the Oskaloosa Honor Guard officiating. Langkamp Funeral Chapel is handling the arrangements. Memorial contributions can be made to Wesley Life Hospice.

Donald Mc Creery, 88, of Pella and formerly of Oskaloosa passed away Monday, March 16, 2020, at The Cottages in Pella, Iowa. Donald Dean Mc Creery, was the son of Lote and Dollie (Pearson) Mc Creery, was born October 2, 1931, at the home of... View Obituary & Service Information

The family of Donald Mc Creery created this Life Tributes page to make it easy to share your memories.

Donald Mc Creery, 88, of Pella and formerly of Oskaloosa passed...