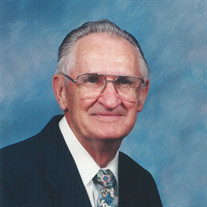 Donald Schultze, 92, of Oskaloosa passed away Friday, May 11, 2018, at the Oskaloosa Care Center. Donald E. Schultze, son of Emil and Pauline (Raabe) Schultze, was born, January 2, 1926, in Stanton, NE. He was a 1943 graduate of Stanton High School. After high school, Don served in the United States Navy in the Pacific Ocean from 1943-1947 and in the United States Naval Reserve in the Mediterranean from 1947-1952. Don went on to attend the University of Nebraska. While there, he received his Bachelor's degree in 1950, his Masters of Education in 1954 and his Doctorate in Education in 1958. On July 31, 1951, Don was united in marriage to Derys Gayle Marsh in Hartington, NE. Don taught, coached and was an administrator in Platte Center, St. Edwards and Duncan Public Schools in Nebraska. He was also an instructor at the University of Nebraska. Don and Derys then came to Oskaloosa, Iowa where Don was a professor and Dean of William Penn College. Don was a member of St. John Lutheran Church in Oskaloosa, IA, the Phi Delta Kappa (an honorary fraternity), the American Legion and Veterans of Foreign Wars. Don’s family includes his wife, Derys of 66 years; his children: Anita (Jim) Smith of Forest City, IA, Jane (Brian) Martain of Brighton, UT, Robert (Stacy) Schultze of Evanston, IL, and Ronald (Sharon) Schultze of Arlington, TX; two grandsons, six granddaughters, two step-granddaughters; and eight great-grandchildren. In addition to his parents, Don was preceded in death by four sisters: Gertrude Vasek, Jeanette Roebuck, Arlene Robinson, and Phyllis Cotton; one brother, Robert Schultze; and a great-grandson, Tyler Schultze. As was his wish, his body has been cremated. A memorial service will be held at 11 a.m., Saturday, May 26, 2018, at St. John Lutheran Church with Rev. Sam Beltz officiating. Military Honors will be provided by the Oskaloosa Honor Guard. Langkamp Funeral Chapel & Crematory has been entrusted with the arrangements. In lieu of flowers, memorial contributions may be given to St. John Lutheran Church or the William Penn University Schultze/Goedeken Scholarship.

Donald Schultze, 92, of Oskaloosa passed away Friday, May 11, 2018, at the Oskaloosa Care Center. Donald E. Schultze, son of Emil and Pauline (Raabe) Schultze, was born, January 2, 1926, in Stanton, NE. He was a 1943 graduate of Stanton High... View Obituary & Service Information

The family of Donald E. Schultze created this Life Tributes page to make it easy to share your memories.

Send flowers to the Schultze family.