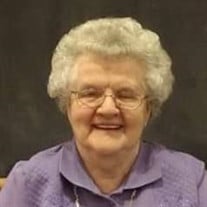 Dora Bruxvoort, 91, of Oskaloosa passed away Sunday morning, March 10, 2019 at Mahaska Health Hospice Serenity House in Oskaloosa. Wilma Dora Bruxvoort, daughter of James and Wilma (Schut) Schimmel, was born April 29, 1927, at the home of her parents in Tracy, Iowa. She attended school in Tracy, graduating in 1945. On March 4, 1949, she married Bernard Glen Bruxvoort at the Christian Reformed Church in Tracy. They first made their home in Grand Rapids, Michigan, near Dora’s parents. In 1951, they returned to Iowa and settled on a farm near Eddyville. A year later they moved to an adjacent farm, where they remained until moving to Oskaloosa in 1966. Dora soon accepted a position with J.C. Penny Department Store. She worked as a sales clerk for 24 years, mainly in the men’s department. While living on the farm, she joined the Harrison Homemakers neighborhood club and remained a member after moving into town as well. Dora was an avid walker; she enjoyed listening to Christian music and also enjoyed cooking Sunday dinner for her family. She was a member of the Bethel Christian Reformed Church. Her family includes her children: Daryl (Sandy Caya) Bruxvoort of Elkader, Iowa, Pat and Ken Arkema of Coralville, Iowa, Connie and Tim Johnson of Celina, Texas, and Bryce and Sandi Bruxvoort of Oskaloosa, Iowa; six grandchildren: Teresa Hu, Dan Arkema, Emily Bruxvoort-Steele, Zachary Johnson, Ian Johnson and Becki Gatton; and 15 great-grandchildren. She is also survived by a brother, Gilbert Schimmel and a sister-in-law, Gert Schimmel, both of Grand Rapids, Michigan; sisters-in-law: Reuvena Bruxvoort of Oskaloosa, Mary Ann (Lawrence) Vander Molen of Pella, Joyce (Darrell) Cline of Oskaloosa, and Barbara Bruxvoort of Fort Collins, CO; brothers-in-law: Marvin (Betty) Bruxvoort of Pella and Gerald “Jerry” (Shirley) Bruxvoort of Oskaloosa; and many nieces and nephews. Dora was preceded in death by her husband Bernard in 2009; a brother, James Schimmel; and a sister, Jean Kuiper. Funeral services for Dora will be held at 11 a.m., Friday morning, March 15, 2019, at the Langkamp Funeral Chapel with Pastor Alvern Boetsma of the Good News Chapel officiating. Interment will be held at 10 a.m., Friday morning, at Forest Cemetery. Those attending the burial should meet the funeral chapel at 9:30 a.m., a procession will leave from the funeral chapel at 9:45 a.m. Visitation will begin at 10 a.m., Thursday morning, at the Langkamp Funeral Chapel; the family will greet visitors from 5-7 p.m., Thursday evening. Memorials can be made to the Oskaloosa Christian School or the Mahaska Health Hospice Serenity House.

The family of Dora Bruxvoort created this Life Tributes page to make it easy to share your memories.

Send flowers to the Bruxvoort family.