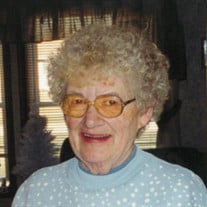 Doris Van Wyk, 85, of Oskaloosa passed away Friday morning, September 20, 2019, at the Mahaska Health Hospice Serenity House in Oskaloosa. Doris Joan Van Wyk, daughter of Cordia and Margaret (Iverson) Wilkinson, was born September 2, 1934, at the rural home of her parents near Chelsea, Iowa. She was a 1952 graduate of Grinnell High School. Doris worked for Van Zee Motors for 14 years as a bookkeeper. She worked as a bookkeeper for Solar Fence as well. She went on to work as a dispatcher at Circle B Transportation and retired from Iowa Workforce Development in 2002. Doris married Ronald J. Van Wyk, January 1, 1971, in Oskaloosa. Together they enjoyed camping in many states and from 1992 – 1998; they worked summers at the Wallashuck Recreation area on the north side of Lake Red Rock for the Corp of Engineers. Doris also enjoyed flower gardening and feeding the birds. Doris’ family includes her husband of 48 years, Ron of Oskaloosa; her sons, David Dalbey of Osceola and Randy Dalbey of Surprise, AZ; a daughter, Connie (Dale) Sanders of Beacon; a daughter-in-law, Dawna Dalbey of Libertyville, IA; and many grandchildren and great-grandchildren. In addition to her parents, Doris was preceded in death by a son, Bobbie Gene Dalbey and two daughters-in-law: Brenda and Diana Dalbey. Funeral services will be held at 11 a.m., Monday, September 23, 2019, at Langkamp Funeral Chapel in Oskaloosa with Pastor Dwayne Poe of the First Church of the Open Bible officiating. The family will greet visitors from 10 a.m. to service time Monday. Burial will be in Union Mills Cemetery. Memorial contributions can be made to Stephen Memorial Animal Shelter.

The family of Doris Joan VanWyk created this Life Tributes page to make it easy to share your memories.

Send flowers to the VanWyk family.