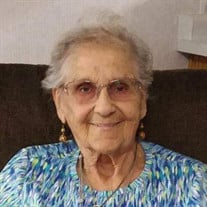 Dorothy Ryken, 86, of Oskaloosa passed away Monday, January 11, 2021 at the Mahaska Hospice Serenity House in Oskaloosa. Dorothy Ann Ryken, daughter of John and Rena (Vonk) Rozenboom, was born November 21, 1934, near Lacey, Iowa. She was a 1952 graduate of Pella Christian High School; she played softball and was part of the basketball team that went to the state tournament in 1952. Dorothy married John Rempe in 1952, and to this union Jerry, Carol, Ken and David were born. They later divorced. Dorothy worked in the sterilizing department at St. Joseph Hospital in Ottumwa and also at the Ottumwa Hospital for more than 24 years, retiring in 1997. July 7, 1996, Dorothy married Sybren James Ryken. They made their home in Oskaloosa and spent seven winters in Arizona after her retirement. He passed away on August 19, 2019. She enjoyed walking, gardening, jigsaw puzzles, playing dominoes, and crocheting. She was a long-time member of Central Reformed Church. Her family includes her four children and their spouses: Jerry and Kathleen Rempe of Eddyville, Carol and Jerry Hammer of Newton, Kenneth Rempe of Ottumwa, and David and Jen Rempe of Oskaloosa; seven grandchildren and their spouses: Jessica and Jeff Keuter, Tiffany and Jimmy Beal, Andrew Swope, Erica and Tom Kitt, Amy and Chris Abbot, Adam and Amanda Hammer and Jennifer and Terry Whitlatch; 15 great-grandchildren; five step-children and their spouses: Sharon and Carey Coop of Belle Plaine, MN, Cindy & Bruce Nolin of Green Briar, AR, Jerry and Jewel Ryken of Oskaloosa, Roger and Beverly Ryken of Denver, CO and Gene and Carolyn Ryken of Conway AR; and numerous step-grandchildren and step-great-grandchildren. She is survived by her sisters and a brother-in-law: Luella Nieuwsma of Oskaloosa, Irene and Garlyn Engelhoven of Oskaloosa, Geraldine Ozinga of Oskaloosa, and her sister-in-law, Nadine Rozenboom of Oskaloosa. In addition to her parents, she was preceded in death by her husband of over 23 years, Sybren; twin brother, Donald Rozenboom, and brothers-in-law, Melvin Ozinga and Arvin Nieuwsma. Funeral services for Dorothy will be held privately. Burial will be in Forest Cemetery. Visitation will be held from 11 a.m. to 7 p.m., Thursday, January 14, 2021, at Langkamp Funeral Chapel. According to the rules put in place by the Iowa Department of Public Health, proper social distancing and appropriate personal protective equipment are advised for attending this public event. The service will be available to view on the Langkamp Funeral Chapel’s YouTube channel Friday afternoon. Memorial contributions can be made to Mahaska Health Foundation for the hospice Serenity House. Langkamp Funeral Chapel has been entrusted with Dorothy’s final arrangements.

Dorothy Ryken, 86, of Oskaloosa passed away Monday, January 11, 2021 at the Mahaska Hospice Serenity House in Oskaloosa. Dorothy Ann Ryken, daughter of John and Rena (Vonk) Rozenboom, was born November 21, 1934, near Lacey, Iowa. She was a... View Obituary & Service Information

The family of Dorothy Ryken created this Life Tributes page to make it easy to share your memories.

Send flowers to the Ryken family.