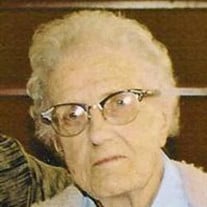 Dorothy Louise Vander Wilt: Dorothy passed away Friday afternoon, April 22, 2005, her 97th birthday, at Pleasant Park Estates in Oskaloosa. Dorothy's outstanding memory was the Boy's Triple Trio from the Oskaloosa Christian School, which advanced to state competition in Des Moines. Other fond memories were the nine-mile house at the town of Laredo, halfway between Oskaloosa and Pella; their many travels in the United States (including Alaska and Hawaii) and foreign countries and her many tatting projects. She was a charter member of the Bethel Christian Reformed Church. Dorothy Louise Vander Wilt, daughter of Albert and Elbartha Meppelink Van Duren was born April 22, 1908 in Leighton, Iowa. Her mother died when Dorothy was nine years old, she and her three sisters then went to live with various relatives. She was a graduate of Peoria Christian School and attended high school for two years, under the direction of Dr. Drost. She attended William Penn College for Normal Training and in 1925, she graduated from the Central Academy in Pella. But since she was too young to begin teaching, she worked for Brandt Ver Meer doing housework. She began her teaching career at European Country School north of Pella, followed by terms at both Flint Ridge and Wheat Grow Country Schools. She received $100.00 per month, but salaries were cut during the Depression years. On Feb. 26, 1932, she married Anthony Martin Vander Wilt, at the home of ""Grandma Van Duren"", where she had spent many happy times as a youngster. Anthony ""Tone"" and Dorothy started farming on the Vander Wilt farm near Prairie City, Iowa; and in 1942 they bought a farm east of Oskaloosa, where their son Keith was born. They farmed here until Keith's death at the age of 18, and in 1960, sold the farm and moved into Oskaloosa. Through the years, Dorothy filled several positions at the Oskaloosa Christian School: she was the first substitute teacher, 1947 to 1957; the first music teacher, 1957 to 1964; and later taught fourth grade, 1964 -1969. She enjoyed having 65 piano students come to her home for private music lessons; and gave her time to the Good News Chapel, where she taught Sunday School, led the choir, and helped husband, Tone, with Daily Vacation Bible School transportation. Dorothy and Tone wintered in Texas for thirteen years and while there, she taught Spanish classes to park residents. In Oskaloosa, she taught English to Laotian families for many years and was honored by Governor Branstad with the Iowa Volunteer Certificate of Appreciation for her volunteer work. Those who honor her passing are sisters: Angelyn McDonough of Brooklyn, NY; Wilma (Larry) Paule of Burlington, IA; Vera Joyce Martyn of Phoenix, AZ; sisters-in-law: Joanne Van Duren of Lawrenceville, GA; Francis Van Duren of Indianapolis, IN; and Tone's sister: Margaret Bolt of Pella; the Van Duren and Vander Wilt nieces and nephews and the Meppelink cousins. She was preceded in death by her parents; her son, Keith M. Vander Wilt; her husband, Tone on June 20, 2003, after 71 years of marriage; two sisters: Alda Mae Gosselink and Elbartha Van Duren ; and two brothers: Henry Van Duren and Melvin Van Duren. PDF Printable Version

The family of Dorothy Louise Vander Wilt created this Life Tributes page to make it easy to share your memories.