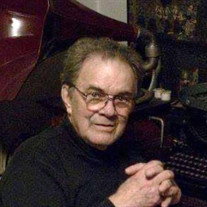 Dr. Cecil Thomas (Tom) Ault, Jr., 84, of Oskaloosa, Iowa, passed peacefully away Sunday, March 7, 2021, at the Mahaska Health Hospice Serenity House after a lengthy battle with dementia after spending the day listening to opera and other favorite music including Claire De Lune. Tom was born on August 17, 1936, to Marguerite Alede Edestrand and Cecil Thomas Ault, Sr. in Moline, Illinois. His family moved to Davenport, Iowa, where he was known to bring stray dogs home and even had a secret horse named Duke. He joined the Army, which allowed him to use the GI Bill to fund part of his education along with being a pinsetter at the Black Hawk Hotel Bowling Alley for 10 cents a round or as a horse-riding stunt man in the circus. He was proud that he paid for his education, and although he never did complete his high school diploma, he always intended to return for his GED. No matter, he was busy exploring the world, traveling to umpteen countries, studying his specialty - baroque theatre, and learning at least ten languages. After managing the scene shop at the University of Michigan in Ann Arbor, he relocated to India in 1976 to teach Spanish, History, and Theater at the American Embassy School, New Delhi, where he acquired his beloved 1954 MG TF. He then moved to the University of San Diego in CA and back to the University of Michigan, where he completed his PhD in Theatre in 1983. There was a brief stint at Louisiana State University in Shreveport, LA, before finally ending at Indiana University of Pennsylvania in Indiana, PA, where he ended his career of 21 years teaching theater history and stage design in 2011. Early in his career, he translated a plethora of previously unknown plays from Italian to English, and in 2017 he published a book of Indian, Rajasthani plays, which is translated from Marwari into English, titled “Folk Theatre of Rajasthan: Introducing Three Marwari Khyal Plays Translated Into English.” This was based on his extensive research and adventures all over rural Rajasthan, traveling with actors as they performed. He also contributed to archeological studies around the Rani Gumpha theatre in Orissa, which had formerly been thought to be meditation caves, but were revealed to have been ancient acoustical chambers designed for performance. His research interests were eclectic and ever-expanding, and toward his later years, he was working in old Italian libraries, translating archaic material about Lucrezia Borgia, and studying her role in the patronage of the arts in her era. He was bestowed with numerous honors, including the Herbert D. Greggs Award in 2009 for his article, “Color in Sixteenth and Seventeenth-Century Italian Stage Design.” He was awarded two Fulbright scholarship to study abroad. He did not squander this time but used it well and spent it in India, Italy, and at the University of Munich in Germany. However, he always said his greatest achievements were his two daughters Kirsten Ingrid Ault and Tara Chowdhry (Dr. Angad Singh Chowdhry). He was later given the gift of the grandchild that he always wanted when Michael Man Singh Chowdhry was born. He spent his final years being lovingly and tenderly cared for by his family in Iowa. His little brother Alva (Al) Ault, sister-in-law (Renee), and family members, Ashton, Sean, Ryan, Gramma, Tom’s dog, Buster, and little Dorian, took the best care of this brilliant man who leaves a lasting impression on so many. They would sing, dance, make art, and Tom would teach Dorian new words in various languages. Tom and Al always argued about who was the best brother; it was never finalized. He is loved, remembered, and missed by his son-in-law, Dr. Angad Singh Chowdhry, and his family in India. There are many others who contributed in Tom’s marvelous life that should be noted, know that you are in our hearts. Many over the world are remembering him, for that we remain grateful. In lieu of flowers please consider a donation in his memory to Alzheimer’s Association, Stevens Memorial Animal Shelter, Howlround or The Serenity House. A celebration of Tom’s life will take place at a later time via zoom. To be notified of the event date email [email protected] Cremation has taken place. Langkamp Funeral Chapel & Crematory has been entrusted with Tom’s final arrangements. Howlround Theatre Commons is a free and open platform for theatre makers worldwide that amplifies progressive, disruptive ideas. Programs include a Journal (publishing platform), Howlround TV (a video archive), and more. Howlround also hosts convenings for face-to-face conversations for theatre makers. All programs are geared towards open source learning, so participants can contribute their own knowledge to push the field forward.

The family of Dr. Cecil "Tom" Thomas Ault Jr. created this Life Tributes page to make it easy to share your memories.