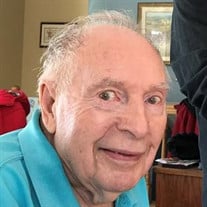 Earl Macksey, 98, of Oskaloosa passed away Wednesday, January 3, 2018, at the Mahaska Health Partnership in Oskaloosa Earl Ellis Macksey, son of Thomas Dennis and Lena Belle Tessman Macksey, was born October 26, 1919, in Oskaloosa, Iowa. Earl was a 1937 graduate of Oskaloosa High School. March 1, 1942, he began his career with the United States Postal Service. He served exactly one month with the Postal Service before being drafted into the U.S. Army, April 1, 1942. He transferred to the Army Air Corp., October 29, 1942, and served in Europe with the 305th Bomb Group and the 364th Bomb Squadron. January 1, 1945, on his 30th mission over Germany, in which he was a bombardier/navigator, his plane, a B-17, was shot down and he was taken prisoner-of-war. He was held at Stalag 1, north of Berlin, near Barth, Germany by the Baltic Sea and held for four months. He revealed that he was treated decently by the Germans. However, it was found that Earl was given very little food, suffered physical and emotional abuse, and was living in frigid conditions. But true to Earl’s nature, he never complained. Following his discharge, Dec. 19, 1945, he stayed in the Army Reserves for a total of 20 years and was discharged as a Major. Earl also resumed his employment with the Postal Service after his overseas service. He worked as a clerk at the Oskaloosa Post Office for 39 years and retired in January 1981. Earl’s sister Rose and future wife, Joan Marie Boyle were roommates at Marycrest College in Davenport. They would meet in the chapel to pray for Earl’s release from the P.O.W. camp and Earl’s safety. While visiting his sister, Rose at Marycrest College in Davenport, he met his future wife, Joan Marie Boyle. They married, June 16, 1947, at St. Patrick’s Church in Iowa City. They were blessed with six children with two sets of twins. Earl was a member of St. Mary’s Catholic Church and the American Legion. He enjoyed spending time with his family, playing cards and games, reading science fiction and James Patterson mystery novels. He was also a fan of the New York Yankees, Chicago Cubs, L.A. Lakers, Chicago Blackhawks, and Iowa Hawkeyes. In his retirement, he took over his children’s Des Moines Register and Oskaloosa Herald newspaper routes. Additionally, he took care of his siblings, taking them grocery shopping and caring for them until they all passed away. Earl and Joan moved to assisted living, at Homestead and continued as a devoted caretaker for his wife until her death in 2014. While at Homestead, he made daily visits to the family home to care for his cats. His last year and half of life, he resided at the Oskaloosa Care Center. Earls’ family greatly appreciated the wonderful care he received at both Homestead and the Oskaloosa Care Center, Earl’s family includes his children: Jane Macksey Clark of Centerville, Ohio, Stephen Macksey of Chicago, Maureen “Molly” (Greg) McCaulley of Oskaloosa, Anne (Michael) Reese of Wheaton, IL, David (Tina) Macksey of Chicago, IL and Daniel (Carla) Macksey of Rolling Meadows, IL; ten grandchildren; and soon anticipated great-grandchild; a sister, Sister Karen “Rose Margaret” Macksey of Davenport, IA; a sister-in-law, Barbara Feeney of Iowa City; a brother-in-law, Stephen (June) Boyle of Portland, OR; and several nieces and nephews. In addition to his parents, Earl was preceded in death by his wife, Joan of 67 years; four brothers: Harold Leo, Wilford, Cecil “Marian” and Robert Macksey; and three sisters: Katherine and Marguerite Macksey and Lucille Kearney. Mass of the Resurrection will be held at 10:30 a.m., Saturday, January 6, 2018, at St. Mary’s Catholic Church in Oskaloosa with Rev. John Spiegel officiating. Burial will be in St. Mary’s Cemetery with Military Honors by the Oskaloosa Honor Guard. A Rosary will be held at the Langkamp Funeral Chapel at 9:30 a.m. prior to the service. Visitation will be held form at 11 a.m. to 7 p.m., Friday at Langkamp Funeral Chapel. Memorials may be made to St. Mary’s Catholic Church.

The family of Earl Ellis Macksey created this Life Tributes page to make it easy to share your memories.

Send flowers to the Macksey family.