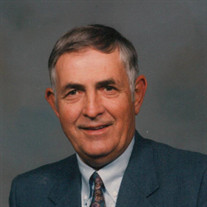 Edgar Grafke, 86, of Oskaloosa, passed away Friday, April 12, 2019, at his home in Oskaloosa. Henry Edgar Grafke Jr. was born December 25, 1932, to Henry Edgar Sr. and Marjorie Lois (Towne) Grafke in Kansas City, Kansas. He grew up in Kansas City, the oldest of six children. He attended Washington High School and graduated in 1951 and then furthered his education at Emporia State Teachers College where he was a member of Alpha Kappa Lambda Fraternity and also played football. While in college, he married the love-of-his-life, Peggy Ann Williams September 4, 1954, at Welborn Community Church in Kansas City, Kansas. He earned his B.A. degree in Art Education in 1955 and then entered the Navy June 7, 1955, at the US Naval Air Station in Olathe, Kansas. After completing his three-year term of active duty June 6, 1958, he took a position teaching art at Meadow Brook Elementary School in Kansas City. After a year there, he was hired by his alma mater, Washington H.S. to teach art. During these years, Edgar continued to pursue his master’s degree at Kansas University, which he received in 1966. In 1968, a former colleague informed him of position at William Penn College teaching art. After visiting Oskaloosa, he and Peggy decided that the college and community were where they wanted to work and raise their children. While at William Penn, Edgar taught ceramics, drawing, painting, design, composition and art history. He also coached tennis and cross country, served as the college’s videographer and faculty sponsor of Alpha Eta Omega Sorority, and helped develop the Jones Collection at William Penn. Ed not only immersed himself in the college but also became an active member of the Oskaloosa community, sharing his gifts and talents as he could: he designed the Mahaska County Flag and the Mahaska County Conservation Board Logo. He served on the Art-on-the Square Committee, the judging of the artists, and for many years demonstrated his pottery skills during the event. Edgar loved nature: he was a beekeeper and an avid gardener and applied organic principles before organic was popular. He also enjoyed hunting and fishing with his sons and friends. Edgar readily accepted challenges and helped design and build the family home with an art studio in the crow's nest. After his retirement in 1999, he spent numerous summers mowing Forest Cemetery. Ed was a member Mahaska #644 Masonic Lodge A.F. and A.M., St. Paul Congregational United Church of Christ from 1968 – 2005, and a former member of Kiwanis. His family includes his wife of 64 years, Peggy; his children: Henry Edgar Grafke III of Oskaloosa, David Alan Grafke (Glen Baker) of Denver CO, and Susan (Rick) Leedom of Oskaloosa; his grandsons: Elliott (Jess) Grafke of Redmond OR and Saif Grafke of Oskaloosa; a great-grandson, Hamilton Grafke. He is also survived by his siblings: Eva Hinds of Louisville KS, Marge (Bob) Doby of Leavenworth KS, Stuart (Jenny) Grafke of Braymer MO; a brother-in-law, Buck Waters of Leavenworth KS; and sister-in-law, Nelly Grafke of Kansas City KS. In addition to his parents, Edgar was preceded in death by his sister, Sally Waters and a brother, Ernest Grafke. Funeral services for Edgar will be held at 10:30 a.m., Wednesday, April 17, 2019, at Langkamp Funeral Chapel with Pastor Steve Howe of Life House Community Church officiating. Burial will be in Forest Cemetery with Military Honors by the Oskaloosa Honor Guard. Visitation will begin after 10 a.m., Tuesday; the family will greet visitors from 5-6:30 p.m. A Masonic Service will be held at 6:30 p.m., Tuesday evening. Memorials can be made to the Stephen Memorial Animal Shelter and Life House Community Church.

The family of Edgar Grafke Jr. created this Life Tributes page to make it easy to share your memories.

Send flowers to the Grafke family.