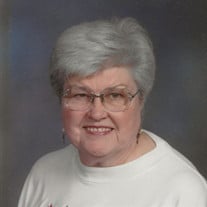 Edith Richardson, 86, of Clearwater, KS and formerly of Oskaloosa, IA, passed away Tuesday, May 25, 2021 at the Clearwater Nursing and Rehabilitation Center. Edith Elizabeth Richardson, daughter of Edward Joseph & Clara Mary Moore Fuhs was born December 25, 1934 in Farson, Iowa. She was a 1952 graduate of Eddyville High School. On August 30th, 1953 she married Daniel Richardson in Oskaloosa, IA. He passed away on May 7, 2001. Edith’s memory is honored by her four children: Jerry (Beth) Richardson of Wichita, KS; Dennis Richardson of Wichita, KS; Les Richardson of Wichita, KS, and Becky Swanson of Camas, WA. She was blessed with 11 grandchildren and 7 great grandchildren. She is survived by one brother, Frances Fuhs of Davenport, IA; and a sister, Patricia Hooten of Bloomington, IN. Edith was preceded in death by her parents, her husband, a son, Tim Richardson, four brothers; James, Ernest, Ben and Marion Fuhs. A graveside service will occur at St. Mary’s Cemetery in Oskaloosa, IA at a later date.

The family of Edith E. Richardson created this Life Tributes page to make it easy to share your memories.

Edith Richardson, 86, of Clearwater, KS and formerly of Oskaloosa,...

Send flowers to the Richardson family.