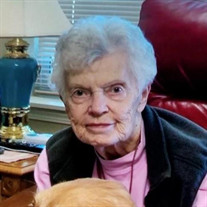 Edna Koogler, 96, of Pella and formally of Oskaloosa, passed away early Monday morning, March 15, 2021 at Groningen House, The Cottages in Pella. Edna Marintha Koogler was born November 26, 1924 in Oskaloosa, IA. She was the eldest child of Evan Edward and Osa (Van Benthusen) Rowe. After her graduation in 1943 from Oskaloosa High School, Edna attended the Sisters of Mercy Nursing School in Marshalltown, IA. She graduated from Sisters in 1946 and began her career in nursing at Mahaska Hospital. Edna traveled the world as a loyal military wife and practiced nursing in various locations, serving others as a surgical nurse, a geriatric nurse and, upon her return to Oskaloosa in 1971, as an obstetrics nurse at Mahaska Hospital. Until her retirement in 1986, Edna assisted in delivery, and diligently cared for, thousands of mothers and babies. Edna was united in marriage with Fred L. Koogler on January 10, 1948. As a working nurse, she was a busy young mother, still making time to volunteer as a Girl Scouts leader from 1963 – 1968. Edna loved dogs and enjoyed their company throughout life, even having several canine visitors at The Cottages in Pella. She was an avid reader, always with a book close at hand, even until her final days. Edna enjoyed quilting and knitting. She donated hand knitted new born caps to both the Pella and Oskaloosa hospitals and was famous in the family for hand knitted wool socks for her adult children and grandchildren. Edna was active in volunteer activities, working with Hospice, the Nelson Pioneer Farm, Oskaloosa High School reunions and her alumni group from the Sisters of Mercy. During the First Iraq War, she prepared and sent countless “care packages” to soldiers serving in that conflict, receiving multiple citations and thanks from military units and commanders. Her family includes her children: Fred (Jane) Koogler, Jr. of Pella and Nancy (Gary) Ferber of Greenfield IA; grandchildren: Jessica Ferber of Greenfield, Tracy (Bryan) Pierce of Boulder, CO, and Genny Lund of Castle Rock, CO; and four great grandchildren. Edna is also survived by her sister, Betty Rowe Walker Rainey, of Oskaloosa and numerous nieces and nephews and their children and grandchildren. Edna was preceded in death by her parents, Evan and Osa Rowe, her birth mother, Eleanora Cosjones Rowe, who died in childbirth in 1927, her husband, Fred, who died July 22, 1992, and two brothers, Jim and Larry Rowe. As was her wish, Edna’s earthly remains have been cremated. A private family graveside gathering will be held at Bloomfield Cemetery in Mahaska County on a date to be determined. Memorial contributions may be made to the Edna Koogler Memorial to benefit the expansion of The Cottages in Pella. Langkamp Funeral Chapel & Crematory has been entrusted with Edna’s final arrangements and direction of memorial funds to benefit The Cottages expansion.

Edna Koogler, 96, of Pella and formally of Oskaloosa, passed away early Monday morning, March 15, 2021 at Groningen House, The Cottages in Pella. Edna Marintha Koogler was born November 26, 1924 in Oskaloosa, IA. She was the eldest child of... View Obituary & Service Information

The family of Edna Koogler created this Life Tributes page to make it easy to share your memories.

Edna Koogler, 96, of Pella and formally of Oskaloosa, passed...

Send flowers to the Koogler family.