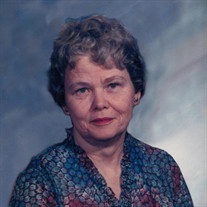 Elinore Jean Griffiths, 89, of Oskaloosa, passed away, Sunday, March 1, 2020, at the Mahaska Health Hospice Serenity House. Elinore Jean Griffiths, daughter of Dan and Violet Pearl (Yeoman) Allen, was born March 3, 1930, in Glenwood, Iowa. She attended Glenwood Community Schools, where she graduated from 8th grade. After her education, Elinore began working at her family's restaurant, Vi's Café. She later married A.P. Howard and they had a son, Ron Howard. They later divorced. Elinore met Ike Griffiths in 1957 and the two were married in Shenandoah, Iowa on June 25, 1960. Together they had a daughter, Kelly. Elinore raised her children while living in multiple cities due to Ike's career. The family settled in Oskaloosa, Iowa, in 1977. Elinore enjoyed genealogy and tracing family history, as well as keeping in close contact with her best friend, JoAnn Hemenez. Elinore and JoAnn were close childhood friends, and they kept in touch by phone calls, cards, and letters for 61 years. Her family includes her son, Ron (Brenda) Howard of Visalia, CA; her daughter, Kelly (John) Hoekstra of Oskaloosa; three grandchildren: Ashley, Wesley, and Matthew; two great-grandchildren: Michael and Harlee Quinn and many other loved grandchildren; 17 great-grandchildren in California; two sisters-in-law: Jo Allen and Sally Allen, and many nieces and nephews. In addition to her parents, Elinore was preceded in death by her husband Ike; three brothers: Frank Allen, Danny Allen, and Bill (Louise) Johnson; and a sister, Mary Mae Johnson. Graveside services for Elinore will be held at 2 p.m., Friday, March 6, at the Glenwood Cemetery in Glenwood, IA. Memorial contributions can be made to the Mahaska Health Hospice Serenity House. Langkamp Funeral Chapel is in charge of arrangements.

The family of Elinore Griffiths created this Life Tributes page to make it easy to share your memories.

Send flowers to the Griffiths family.