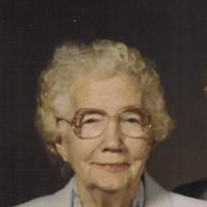 Elizabeth Hol: Elizabeth passed away at the New Sharon Care Center on Monday afternoon, March 7, 2005 at the age of 87 years, 11 months and 15 days. Elizabeth's memory is honored by her husband, Teunis of Oskaloosa; two sons, Cornelis Edward (Lois) Hol of Oskaloosa and David Jan (Gladys) Hol of Otley and a daughter, Dorothy Marjean (Durk) De Vries of Pella. She was blessed with six grandchildren: Travis (Melissa) Hol of Pella, Trenton (Lydia) Hol of Des Moines, Katie (Chad) Brooks of Byron Center, MI; Chad (Amanda) Hol of Dallas, TX; Christina Hol of Otley and Corrine (Luke) Wyma of Pella. She is survived by two sisters: Jennie De Ronde and Anna Ryken, both of Oskaloosa; two sisters-in-law: Margaret and Dorothy De Ronde, both of Oskaloosa; and two brothers-in-law: John (Ruth) Van Weelden of Oskaloosa and Jerry Deppe of Jennison, MI; and special neighbors, Gene & Sherry Sytsma. Elizabeth Hol, daughter of Cornelius & Aleda Stam De Ronde was born March 20, 1917, near Eddyville in Wapello County. After finishing the eighth grade, she was employed by families in Oskaloosa to help with their children and household duties. At the onset of World War II, she & her sister, Wilma, traveled to Grand Rapids, MI, where she worked for 4 years in the Keeler Brass Factory making shell casings for the war effort. Upon her return to Oskaloosa she attended beauty school and opened her own shop, which she operated for 2 years. On October 27, 1948, she and Teunis Jan Hol were united in marriage at her sister, Cornelia Van Weelden's rural Mahaska county home. Although Elizabeth's main occupation was always homemaker and mother, she helped her husband at his store, Hol Feed and Seed and also was an Avon saleslady. In her later years, she helped several elderly people in their homes and even cared for them in her own home. Elizabeth had a heart for the elderly and was very faithful in visiting shut-ins and nursing home residents. Elizabeth was also an avid gardener, growing and canning all of the family's fruits and vegetables. She made her Profession of Faith at an early age. She was a member of the First Christian Reformed Church in Oskaloosa, where she was a member of the church's Ladies Bible hour as well. She was preceded in death by her parents; an infant daughter, Alida Lou; three sisters: Johanna De Ronde, Cornelia Van Weelden, and Wilma Deppe; two brothers: Kryn and Jacob De Ronde and a brother-in-law, Elmer Ryken. PDF Printable Version

The family of Elizabeth Hol created this Life Tributes page to make it easy to share your memories.

Send flowers to the family.