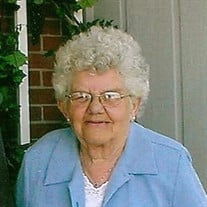 Ellen Durham, 93, of Oskaloosa passed away Friday, October 30, 2020, at the Oskaloosa Care Center. Ellen Mae Durham, daughter of Franklin Harris and Mildred Lee Newell Sherman, was born January 21, 1927, in Oskaloosa, Iowa. She was a 1945 graduate of Oskaloosa High School. Following her education, she worked as a telegraph operator for Western Union. On September 7, 1947, she married Forrest Lee Durham at the Central United Methodist Church in Oskaloosa. For many years, Ellen devoted her time to homemaking and raising her daughter, Lee Ann. In 1967, Ellen began working at the William Penn College Snack Bar; she worked there for 32 years when she went to work at Wal-Mart. She worked as a greeter and in the snacks section at Wal-Mart until her retirement in 2007. Ellen was a member of Central United Methodist Church, IHN Kings Daughters, Pythian Sisters, and Royal Neighbors. Her hobbies included embroidery, cross-stitch, reading, and attending all her grandchildren’s events. Ellen’s family includes her daughter and son-in-law, Lee Ann and Fred Rice of Ottumwa; three grandsons: Brenton (Katrina) Rice of Cedar Rapids, Iowa and his children, Quinten and Hayden; Caleb (Shelby) Rice of Fremont and his daughter, Carter; and Heath Rice of Ottumwa. She is also survived by a bonus grandson, Clint Osterloh, of Tracy. Ellen was preceded in death by her parents and her husband, Forrest, on September 4, 2009. Graveside funeral services for Ellen will be held at 10:30 a.m., Tuesday, November 3, 2020, at University Park Cemetery with Pastor Alvern Boetsma of the Good News Chapel officiating. Visitation will be held from 10 a.m. to 6 p.m., Monday at Langkamp Funeral Chapel. According to the rules put in place by the Iowa Department of Public Health, proper social distancing and appropriate personal protective equipment are advised for attending this public event. The service will be available to view on the Langkamp Funeral Chapel’s YouTube channel Tuesday afternoon for those unable to attend the ceremony. Memorial contributions can be made to Mahaska Health Hospice or Stephen Memorial Animal Shelter.

The family of Ellen Mae Durham created this Life Tributes page to make it easy to share your memories.

Send flowers to the Durham family.