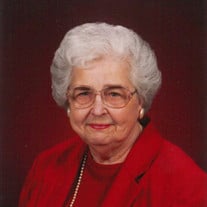 Ellen Loreen Sears Kentfield, age 89, of Oskaloosa passed away Sunday, March 17, 2019, at the Mahaska Hospital in Oskaloosa. Ellen Loreen Sears Kentfield, daughter of Oscar Raymond Sears and Nevah Thatcher Sears, was born February 14, 1930, at 504 South 4th Street in Oskaloosa, Iowa. She was a 1948 graduate of Oskaloosa High School as well as a Murphy School of Business graduate. She attended William Penn College and majored in music, specifically the piano and organ with Dr. Charles Griffith. Ellen was united in marriage to Charles Edward Kentfield in Oskaloosa, Iowa on October 14, 1956. Following her education, Ellen was employed as an agency secretary with the Tom H. Eckhoff, Bankers Life Nebraska Insurance Company in Oskaloosa for 22 ½ years and then with the Oskaloosa Municipal Water Department as a customer service representative for 21 ½ years. She retired on September 15, 1995. Ellen served the First Christian Church as an organist for 50 years, retiring October 26, 2003. Ellen’s passion was her music; she attended many piano and organ seminars through the years and readily shared her talent playing in many churches in Oskaloosa and throughout the state for Sunday services, wedding and funerals. Ellen was a member of the First Christian Church in Oskaloosa, Iowa and was baptized Easter Sunday, April 9, 1944. She was a 30-year member of the First Christian Church Choir. She also participated in the First Christian Church’s Young People’s Department for 20 years as a pianist, assistant, and department superintendent. She was a past president of C.W.F. Group 7, (now called Lydia Circle); and she served as its Sunshine Chairperson since 1978. Ellen was a member of the Business and Professional Women’s Club for many years; she was voted its “Woman of the Year” recipient in 1971 and 2003 and served as its president from 1972-1974. Ellen had the privilege and honor of being both pianist and organist for four Iowa Federation and Professional Women’s Clubs Annual Installations in Des Moines. For 13 years, Ellen served as the pianist and organist for the annual Beta Sigma Phi Sorority Fall Style Show held at the American Legion. Ellen was also a member of “In His Name King’s Daughters and Sons” since 1964 and served as the secretary since 1988. She served as “Mahaska County King’s Daughters” Past President from 1978 – 1980 and also served as their vice-president and secretary. Ellen was a life member of the Mahaska County Historical Society, and a long-time member of the Oskaloosa Women’s Club, the Keo-Mah Genealogical Society, and Friends of Iowa Public Television. As a member of the O.H.S. Class of 1948, she served as chairman of the 25th, 40th, 50th, and 60th class reunions. Ellen loved collecting: she compiled numerous scrapbooks and photo albums; she had a Valentine, postcard, and music collection. She enjoyed researching and documenting family genealogy. Ellen was known for remembering family and friends’ special days with cards, and in later years she delighted in writing a long newsy Christmas letter. Ellen is survived by her Sears, Thatcher and Kentfield cousins and her special friends: Scott and Diane Stewart, Sandy Stewart and Vickie and Randy Wolfe, all of Oskaloosa and Linda Wheeler of Des Moines. Ellen was preceded in death by her parents; her husband, Charlie on January 15, 2009; her infant twin sister, Helen Leona Sears; her maternal grandparents, William Henry and Ella Smith Thatcher; her paternal grandparents, Thomas Marion and Ida Jane Speak Sears; and her childhood Boston Terrier Dog, Trixie. Funeral Services will be held at 10:30 a.m., Friday, March 22, 2019, at the First Christian Church with Pastor Molly Goodrich officiating. Burial will be in Forest Cemetery. Visitation will begin on Thursday after 11 a.m. at Langkamp Funeral Chapel; the family will greet visitors from 5 - 7 p.m., Thursday. Memorials may be made to the First Christian Church piano fund or the Charlie Kentfield Baseball Complex.

The family of Ellen L. Sears Kentfield created this Life Tributes page to make it easy to share your memories.

Send flowers to the Kentfield family.