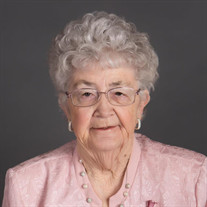 Elsie Kelderman of Oskaloosa passed away Sunday, January 23, 2022, at the Mahaska Health Serenity House in Oskaloosa, at the age of 93. Elsie Marie Kelderman was born on March 11, 1928, near Fremont, Iowa at the “home place” to Marion and Henrietta (Van Weelden) Brink. Her childhood was spent on the farm with her parents and six other siblings. Elsie attended Pleasant Valley School. Elsie saw her need for a Savior as a child. Sometime in the 1960s, Elsie and a neighbor lady went to a Billy Graham Crusade. It was then the Lord led her to walk forward to make sure that she was right with the Lord. She loved and enjoyed her Christian family at Bethel Christian Reformed Church. She was united in marriage to Harold L. Kelderman on February 12, 1947, and they lived to celebrate their 56th wedding anniversary. During her marriage, Elsie was a homemaker raising their four children (Nancy, Mary, Dan, and Dennis) and occasionally working outside the home to put Harold through college. Her most memorable job was being Harold’s secretary at Kelderman Realty, the Century 21 office they owned and operated. Her home was open to family, loved ones, and all sorts of friends made along the way. She always kept plenty of baked items handy if someone dropped in. Left to cherish her memory are her children; Nancy (Dana) of Knoxville, Mary of Madison, WI, Daniel (Shirley) of Oskaloosa, and Dennis (Mary) of Wichita, KS. She was blessed with nine grandchildren: Marty (Jill) Beckett, Sarah (Scott) Wintory, Peter Beckett, Andrew (Claire) Kelderman, Hannah Kelderman, Simon Kelderman, Chelsie Kelderman, Abby (Neal) Kelderman, and Caleb Kelderman; and seven great-grandchildren: Nicholas Beckett, Tatum Wintory, Ty Wintory, Micah Kelderman, Noah Kelderman, Ezra Kelderman, and Ellie Blake. Her surviving in-laws: Anna (Rich) Kelderman Oskaloosa, Bernice (Herman) Kelderman Des Moines, Lawrence and Marlene Kelderman of Des Moines; and several nieces and nephews. Elsie was preceded in death by her father and mother, Marion and Henrietta Brink; her siblings and their spouses: Angeline (Lawrence) Van Mersbergen, Richard (Virginia) Brink, Alice (Johnny) Van Englehoven, Dorothy (Jake) Kuiken, Henrietta (Leonard) Veldhuizen and Marion (Jeanella) Brink; her in-laws and their spouses; Viola (Glen) Groenenboom, Robert (Evelyn) Kelderman, Helen (Bob) White, Melvin (Cobie) Kelderman, Richard Kelderman, and Herman Kelderman. Funeral Services for Elsie will be held at 10 a.m., Saturday, January 29, 2022, at Bethel Christian Reformed Church with Rev. Doug Van Der Pol officiating. The Burial will be in Forest Cemetery. Visitation will begin at 11 a.m., Friday at Langkamp Funeral Chapel; the family will greet visitors from 4-6 p.m. Memorial contributions can be made to Bethel Christian Reformed Church or the Oskaloosa Christian School. The family request that everyone wear masks at both the visitation and the funeral.

The family of Elsie Marie Kelderman created this Life Tributes page to make it easy to share your memories.