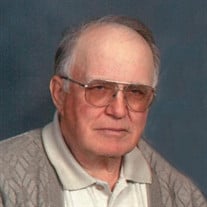 Ernest Klaaren, 91, of Oskaloosa, passed away Saturday morning, November 7, 2020, at the Oskaloosa Care Center. Ernest John Klaaren, son of Wilfred James and Anna Jacoba Wilhelmina (Cornelissen) Klaaren, was born February 24, 1929, at his parents' home near Leighton, Iowa. The family soon moved to a farm near Eddyville, where Ernie attended numerous country schools, including Coal Field School. He graduated from Eddyville High School in 1947 and then went to work at Morrell's Meat Packing Plant in Ottumwa. Ernie married the love-of-his-life, Betty Jean Van Zetten, on September 22, 1950, at Central Reformed Church in Oskaloosa. He and Betty made their home in Oskaloosa until he was inducted into the U.S. Army, February 26, 1951. He was initially trained in Indiana and then was sent to serve in Germany. Following his discharge, Ernie returned to Mahaska County, and he and Betty settled on a farm near Fremont. Ernie enjoyed raising Angus cattle and hogs besides field crops. When he and Betty moved to Oskaloosa in 1991, Ernie farmed for nearly 40 years. Ernie liked to volunteer, taking people to doctors' visits and other appointments, and while in Fremont, he kept the township cemeteries mowed. He and Betty were active in the Mahaska Country Conservation Commission for over 30 years. They spent countless hours cleaning up dumpsites and improving the countryside. Ernie and Betty made many dear friends while farming near Fremont; monthly card club with friends was a tradition they maintained for over 50 years. Ernie served as a 4-H leader when his children were young; he enjoyed attended their ballgames and continued to enjoy attending high school sporting events even after his children had graduated. Ernie was a member of the Central Reformed Church; he served as an elder over the years and belonged to the Men's Brotherhood. In his retirement years, he took many work trips with the church and served with Habitat for Humanity. He took great pride in keeping the church's hedges and bushes neatly trimmed, as well as helping many others with their yard work too. During the numerous years that Ernie farmed, he enjoyed his dogs’ companionship and often treated them with an ice cream cone when he was in Fremont on business. Ernie's faith was the foundation of his life; he lived the Golden Rule each day. His family recalls he could sometimes be heard singing hymns while he worked. Ernie's family includes a son and daughter-in-law, Larry and Mary Klaaren of New Lenox, IL; two daughters and sons-in-law: Susan and Bruce Thornal of Greeley, CO and Beth and Steve Terpstra of Oskaloosa; four grandchildren and their spouses: Heather and Scott Gilroy of Cedar Falls, IA, Wes and Holly Terpstra of Oskaloosa; Zachary Klaaren of Chicago, IL and Zoe Klaaren (fiancé -Austin Murray) of Washington, IL; two step-granddaughters: Jenn and Shane Bauman and Krista Lancaster, all of Castle Rock, CO; five great-grandchildren and six step-great-grandchildren; a sister, Marilyn Jones of Greenville, TX; four brothers-in-law and two sisters-in-law: Byron Engelhoven of Oskaloosa, Gilbert Visser of Oskaloosa, IA; Lawrence and Claudia Van Zetten of Custer, SD, and Jim and Diane Van Zetten of Grand Rapids, MI. In addition to his parents and his wife of 64, Ernie was preceded in death by an infant son, Ernest Gene; an infant great-grandson, Noah Gilroy; three sisters and a brother-in-law: Martha and Harold Nieuwsma, Evelyn Engelhoven and Mildred Visser; and a sister-in-law and brother-in-law, Helen and Clarence Van Heukelom. A Celebration of Life for Ernie Klaaren, who passed away in November of 2020, will be held this Saturday, April 24, at Stillwater Cabin, 2052 275th St., Oskaloosa. Visitation will begin at 4:00 PM with the Service beginning at 5:00 with food and fellowship to follow. Please RSVP to Beth Terpstra.

The family of Ernest Klaaren created this Life Tributes page to make it easy to share your memories.

Send flowers to the Klaaren family.