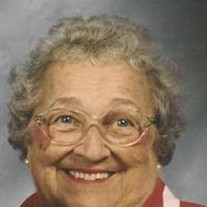 Estella F. Vermillion Edwards: Estella passed away Wednesday, Aug. 27, 2003 at Pleasant Park Estates in Oskaloosa at the age of 85 years, 7 months and 13 days. Estella was a member of the Central United Methodist Church, Eastern Star, the American Legion Auxiliary, and the Oskaloosa Women's Club. She enjoyed golf and was an avid Hawkeye Fan and a member of the University of Iowa Alumni Association, with whom she took many Caribbean cruises. Estella Fern Edwards, daughter of Harry R. & Leola Wymore Smith, Sr. was born Jan. 14, 1918 in Union Township, Mahaska County, Iowa. The family moved to Barnes City in 1929 where she was a 1934 graduate of Barnes City High School; she continued to work at the school as the assistant secretary. In 1945 she married Carl J. Taylor of Barnes City in Columbia, SC. They lived in Oskaloosa where she was employed at Iowa Trust and Savings Bank and then Mahaska State Bank, from which she retired in 1977. Carl passed away in 1971. Estella married John Vermillion in 1976; he passed away in 1984. On September 16, 1998, Estella married Lloyd Hjort Edwards in Sedona, AZ. Estella was able to stay with Lloyd in their home until 7 days prior to her death, when ill health made it necessary for her to move to the nursing home. Estella is survived by her husband, Lloyd of Oskaloosa; a sister, Marguerite Lacey of Port Ludlow, WA and many nieces and nephews. She was preceded in death by her parents, her first and second husbands, six brothers: Alfred, Arnold, Richard, Ray and Harry, Jr. Smith and a brother in infancy; and six sisters: Elizabeth Westercamp, Evah Van Fleet, Bessie Smith, Anna Mia Pleasant, Ruby Smith, and Alta John. PDF Printable Version

Estella F. Vermillion Edwards: Estella passed away Wednesday, Aug. 27, 2003 at Pleasant Park Estates in Oskaloosa at the age of 85 years, 7 months and 13 days. Estella was a member of the Central United Methodist Church, Eastern Star, the... View Obituary & Service Information

The family of Estella F. Vermillion Edwards created this Life Tributes page to make it easy to share your memories.