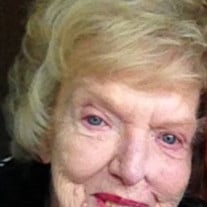 Esther Lanphier, 89, of Oskaloosa passed away Tuesday morning, June 9, 2015, at her home in Oskaloosa. Esther Mae Lanphier, daughter of Lester Lee and Delores (Ellis) Horn, was born July 27, 1925, in Oskaloosa, Iowa. Esther attended Oskaloosa Schools and was a member of the class of 1943. She married Charles W. McCall in 1943 and they made their home in Oskaloosa. Esther was a stay-at-home mother for several years, raising their four children: Charles, Connie, Michael and Robert. Esther and Charles later divorced. Esther attended beauty school in Ottumwa in 1960 and then taught at the school for a few years. 1967, Esther married Ed Gass and to that union one daughter, Cele, was born. She worked in the beauty shop at the Downing Hotel and later, she and Ed owned and operated the coffee shop in the Downing Hotel. In 1968, Esther and Ed started a Veterans Residential Care Home; they operated it together until 1973, when Ed passed away. Esther operated the home by herself until 1977 when she married Kenny Lanphier. They operated the home until 1993, when they retired and turned the home over to her son and daughter-in-law, Bob and Dixie McCall. Over the years, Esther cared for more than 100 veterans. She enjoyed a weekly trip to Meskwaki Casio in Tama. The time she spent with her family is what she treasured the most. Esther’s family includes her children and their spouses: Charles W. McCall of Del Ray Beach, FL, Connie and Mike Bye if New Braunfels, TX, Michael and Jacque McCall of Branson, MO, Robert and Dixie McCall of Oskaloosa, and Cele and Robert Evans of Oskaloosa; nine grandchildren, eight great-grandchildren, two great-great-grandchildren, several nieces and nephews; her beloved Shih Tzu dog, Ike; and her caregivers, Leah and Bonnie. In addition to her parents, Esther was preceded in death by three husbands; three sisters: Inez Queen, Elaine Vonfeldt, Rowena Horn, and her beloved dogs: Patsy and Zeke. Funeral Services for Esther will be held at 10:30 a.m., Saturday, June 13, 2015, at Garland-Van Arkel-Langkamp Funeral Chapel with Pastor Alvern Boetsma of the Good News Chapel officiating. Burial will be in Forest Cemetery. Visitation will begin at 10 a.m., Friday, at the funeral chapel; the family will be present from 5-7 p.m. to greet visitors. Memorials may be made to Mahaska Future View, Inc. for the beautification of Oskaloosa. PDF Printable Version

The family of Esther Mae Lanphier created this Life Tributes page to make it easy to share your memories.

Send flowers to the Lanphier family.