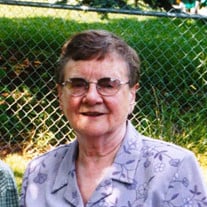 Evelyn Kinsinger, 97, of Clive and formerly of Oskaloosa, Iowa passed away Friday, May 10, 2019, at UnityPoint Hospice-Taylor House in Des Moines, Iowa. Evelyn Cherry Kinsinger was born August 19, 1921, near Walker, Iowa, the daughter of Ross and Myrtle Ann Van Tasell Cherry. She was the middle child of five, having three brothers and a sister. The family lived near Troy Mills, Iowa and later purchased the Van Tasell farm near Quasqueton. Evelyn attended Good Hope Rural School and graduated from Quasqueton High School in 1939. As valedictorian of her class, she received a scholarship to the American Institute of Commerce business school in Davenport, Iowa. Working for board and room she attended school twelve months, graduating and accepting a position at the State Mental Health Institute in Independence as secretary to the medical staff. Later she took a position as secretary to Farm Bureau-Extension in Ottumwa and worked there during the World War II years. Evelyn was a long time 4-H member and served as county president her senior year in high school. The family lived off the bus route and after leaving the bus had a 2-mile walk home. These were difficult times for everyone recovering from the severe depression of the 1930s. Electricity did not come to this rural area until 1940. Evelyn and Elmer were married in her home church, the Union Protestant Church, Quasqueton, Iowa, on Easter Sunday, April 21, 1946. During Elmer’s senior year at Iowa State University, they lived in a room in a private home in Ames, and she worked for the Extension Service at Morrell Hall on campus. After graduation in 1947, they moved to the farm of her parents near Quasqueton. Three of their daughters, Karen, Margaret, and Marilyn were born at Independence, Iowa. In 1954, Elmer and Evelyn moved to a farm in Cedar Township, Mahaska County. Their fourth daughter, Cherry, was born at Ottumwa Hospital in 1959. Evelyn worked part-time in the office of the Cedar-Fremont Methodist churches taking Cherry and the baby bed along as she worked. After Cherry started to school, Evelyn worked two years in Oskaloosa and then transferred to the Ottumwa Federal Land Bank where she was office assistant for ten years. Evelyn retired from work in 1977 returning to the farm to assist with the farm work. In 1984, they purchased a home in Oskaloosa and Marilyn, and Bruce Van Roekel moved to the farm. Changes have been made over the years, but they enjoyed the many years they lived there. Evelyn served on the Ottumwa District Mission Committee of the Methodist Church for nine years and as a District Officer of United Methodist Women for many years. She and Elmer were very interested in the mission committee of the church and participated in many work trips including several in the United States as well as Jamaica, Honduras, and Mexico. At the Oskaloosa church, she was an officer of UMW and served on the mission and evangelism committees. She served four years on the Board of Laity and Program Review Committee of the Iowa Conference of the United Methodist Church. Evelyn belonged to the CCC Club of Fremont; Friendship Circle of the Kings Daughters and Sons; Farm Family Group; Oskaloosa Women’s Club; Hospital Auxiliary; Church Women United; Chapter IO of PEO; the Cedar Crusaders and the Oskaloosa Come Join Us Sunday School Class. She enjoyed doing volunteer work and read hundreds of books. She and Elmer loved to travel to visit their children and to many places around the world. Evelyn lived her final years at Woodlands Creek Retirement Facility in Clive, Iowa. Evelyn dearly loved her family. She and Elmer had four daughters: Karen (Gus) Skovgard, Ankeny, Iowa; Margaret (Charlie) Towers, Coralville, Iowa; Marilyn Van Roekel (Jeff Barton) Frederick, Colorado; and Cherry (John) Coen Wellsville, Kansas. Evelyn was proud of her ten grandchildren and fifteen great-grandchildren. Evelyn lives on in the lives of all who loved and cherished her. Her cheerful and kind nature, her generosity of spirit, her love of learning and inquisitive nature, as well as her deep faith and positive outlook, deeply affected all those who were close to her. Evelyn was preceded in death by her husband, Elmer, and siblings Frederic Cherry, Royal Cherry, Esther Cherry Thomas, Lester Cherry and infant brother Alvin. A memorial service will be held at 1 p.m., Wednesday, May 15, 2019, at Langkamp Funeral Chapel with Rev. Dr. Brian Beckstrom of Wartburg College officiating. Burial will be in Forest Cemetery. Visitation will begin at 10 a.m., Tuesday, at Langkamp Funeral Chapel; the family will greet visitors from 5-7 p.m., Tuesday evening. Memorial contributions can be made to Central United Methodist Church, Timberline Church in Urbandale or Taylor House Hospice.

The family of Evelyn Cherry Kinsinger created this Life Tributes page to make it easy to share your memories.

Evelyn Kinsinger, 97, of Clive and formerly of Oskaloosa, Iowa...

Send flowers to the Kinsinger family.