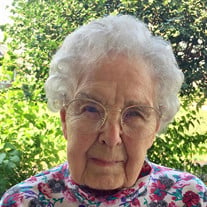 Faye Hugen, 100 years, of Oskaloosa passed away August 23, 2018 at the Comfort House in Pella, Iowa. Josena Faye Hugen, the second of four children was born to John A. and Josena (Klyn) Grandia on August 22, 1918, at their rural home near Leighton, Iowa. She attended country school through the eighth grade and then worked for families in the area with childcare, housekeeping, and cooking. As a young woman, she made her profession of faith at Ebenezer Reformed Church in Leighton. On May 28, 1952, Faye was united in marriage with Bert Leo Hugen, a young widower with three children, who had moved from a farm near Leighton to a home in Oskaloosa, Iowa. Her early work experience served her well as she stepped into the role of wife and mother. Faye and Bert were additionally blessed with two daughters, creating a busy household of five children. Faye and Bert had a large garden for many years and preserved its bounty for the winter months. Faye and Bert were members of the Central Reformed Church where she was a member of a Women’s Circle, taught Sunday School and Vacation Bible School, and volunteered for many other activities. When her daughters were young, Faye served as Girl Scout Leader. Faye had a caregiver’s heart. After her family was raised, she volunteered at the Mahaska Hospital Snack Bar, Mahaska Hospice, American Cancer Society, and the Ecumenical Food Cupboard. Faye enjoyed quilting and created many baby quilts for her grandchildren, great-grandchildren, and children of friends. She also donated quilts to church mission projects. Faye’s family includes her children: Linda Groth of Boulder, Colorado; Jane Dare of Rolla, Missouri; Herb Hugen of Sioux City, Iowa; Alethea (Mark) Williams of Winterset, Iowa; and Josena (Randy) Wadle of Newton, Iowa; 11 grandchildren; 16 great-grandchildren; two sisters-in-law: Francene Hugen of Oskaloosa, Iowa, and Bernice Grandia of St. Louis, Missouri; and brothers-in-law and sister-in-law: Melvin and Sylvia Hugen of Grand Rapids, Michigan, Max Hoeksema of Pella, Iowa; and many nieces and nephews. In addition to her parents and her husband, Bert, Faye was preceded in death by grandson, Andy Goff; sons-in-law: Paul Groth, Charles Dare, and David Goff; sister and brother-in-law, Norena and Robert Veenstra; brothers and sister-in-law: Robert and Carol Grandia and Abron Grandia; brothers-in-law and sisters-in-law: Henry and Helen Hugen, Harold and Nancine Hugen, Robert Hugen, and Mildred Hoeksema. Faye will be deeply missed by her family and friends. Donations in Faye’s memory can be made to the Oskaloosa Ecumenical Cupboard, 205 S D St, Oskaloosa, Iowa 52577, or to the Mahaska Health Partnership Hospice Services, 1229 C Avenue East, Oskaloosa, Iowa 52577. Funeral Services for Faye will be held at 10:30 a.m., Monday, August 27, 2018, at Central Reformed Church in Oskaloosa Rev. Jon Nelson officiating. Burial will be in Evergreen Cemetery. Visitation will begin after 10 a.m., Sunday, at Langkamp Funeral Chapel; the family will greet visitors from 2-4 p.m. Sunday afternoon at the funeral chapel. Memories and condolences can be sent to the family by visiting langkampfuneralchapel.com.

Faye Hugen, 100 years, of Oskaloosa passed away August 23, 2018 at the Comfort House in Pella, Iowa. Josena Faye Hugen, the second of four children was born to John A. and Josena (Klyn) Grandia on August 22, 1918, at their rural home near Leighton,... View Obituary & Service Information

The family of Faye Hugen created this Life Tributes page to make it easy to share your memories.

Send flowers to the Hugen family.