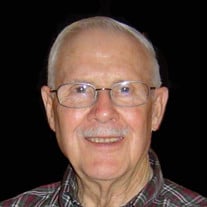 Floyd LaMont Cooper, age 91, of Stevens Point, WI, and formerly of University Park, IA passed away early Sunday morning, February 16, 2020, at Ascension St. Michael’s Hospital in Stevens Point, WI. Floyd was born on January 7, 1929, in a sod house ten miles southwest of Ansley, NE, the oldest of three sons, born to Lamont and Neffie (Harmon) Cooper. Floyd grew up on a farm and attended rural elementary schools, graduating from Ansley High School in 1946. While attending the Methodist Church in Westerville, Nebraska, with his parents and brothers, he came to a personal knowledge of Jesus Christ as his Savior at eight years of age and shortly thereafter received God’s call to preach. In preparation for the ministry, he attended Asbury College (Wilmore, KY) for one year and graduated with an AA degree from Central Christian College of Kansas (McPherson, KS) in 1948. On December 26, 1951, he and Maurine Schufeldt were married at her parent’s home west of Burwell, NE. They became the parents of three children: Rodney, Rhonda, and Leighton. Together they served several Free Methodist churches in Nebraska before graduating from Greenville College (Greenville, IL) in 1961. After pastoring the Free Methodist church in Ottawa, KS, while attending the Nazarene Theological Seminary in Kansas City, MO, they returned to the Nebraska Free Methodist conference where they pastored at Fremont, Omaha, and Amelia. During this time, he was a General Conference delegate twice, served as a Stationed Superintendent for four years, and was a member on various conference committees. He was Conference Treasurer for 31 years in Nebraska and Iowa. They moved to Oskaloosa, Iowa, in 1981 to pastor the Free Methodist Church and during the four-year pastorate taught Bible courses at Vennard College for three of those years. From 1985-1994, Floyd was associated with Vennard College in a variety of responsibilities, including Bible teacher, Christian Service Director, Financial Aid Director, and Chapel Coordinator. From 1985-1996 they pastored the Lovilia Community Church, followed by a six-month interim pastorate in Lincoln, NE and Union Chapel, Fremont, IA from 2005-2008. Following his “official retirement” in 1994, Floyd continued in volunteer work at the college, assisted people in the community in various ways, and supplied pulpits in the area. After moving to Plover, WI, he continued his ministry, serving two Senior Care Centers conducting chapel services. Floyd is survived by his children, Rodney (Deb) of Pagosa Springs, CO, Rhonda (Neil) Rippey of Plover, WI and, Leighton (Jill) of Murrysville, PA; six grandchildren: Sarah Zimmerman, Brandon Cooper, Nathan Rippey, Dustin Cooper, Shelby Cooper and Blake Cooper, ; six great-grandchildren, brother Don Cooper of Yuba City, CA as well as many nieces, nephews and a host of friends. He was preceded in death by his parents; wife, Maurine on August 28, 2019; and by his brother, Keith Cooper. Funeral Services will be held at 10:00 a.m., August 15, 2020, at Langkamp Funeral Chapel, 2116 North 3rd St., Oskaloosa, IA, with Pastor David Brown officiating. Interment of his ashes will be in University Park Cemetery. The family will greet visitors from 9:00 to 10:00 a.m. Memorial contributions can be made to International Child Care Ministries of the Free Methodist Church of North America.

The family of Rev. Floyd Cooper created this Life Tributes page to make it easy to share your memories.

Send flowers to the Cooper family.