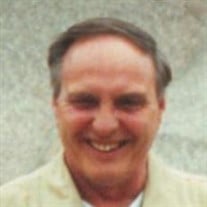 Floyd Dickerson, 77, of Oskaloosa passed away Friday, October 2, 2020, at his home in Oskaloosa. Floyd Junior Dickerson, son of Floyd and Mary (Houser) Dickerson, was born on October 19, 1942, near Kirksville, Missouri. The family moved to Oskaloosa when he was a youngster, and he finished his education at Oskaloosa High school, graduating in 1962. Following his education, he enlisted in the U.S. Navy on October 12, 1961; he served in active duty for four years and four months and was at sea for two years and nine months. Floyd married Michaella Davis, and to this union, a son, Lavern Harrison Dickerson, was born. Floyd and Michaella later divorced. In 2002, Floyd married Galina Olkava of Russia. Floyd worked for most of his career as a cook at the V.A. Hospital in Knoxville. He enjoyed traveling, researching genealogy, a spirited political conversation, and fishing. He is survived by his wife, Galina Olkava of Russia; a step-daughter, Bogdana Holewinska of Russia; a brother, Daniel (Sue) Dickerson of Oskaloosa; a sister-in-law, Mary Ann Dickerson of Albia; and a brother-in-law, Roy Draper of Texas. In addition to his parents, Floyd was preceded in death by his son, Lavern, who died February 25, 2018; a brother, Clyde Dickerson; and a sister, Mary Louise Draper. As was his wish, Floyd’s body has been cremated. A celebration of his life and burial of his ashes will be held at a later date. Langkamp Funeral Chapel & Crematory has been entrusted with his arrangements.

Floyd Dickerson, 77, of Oskaloosa passed away Friday, October 2, 2020, at his home in Oskaloosa. Floyd Junior Dickerson, son of Floyd and Mary (Houser) Dickerson, was born on October 19, 1942, near Kirksville, Missouri. The family moved to... View Obituary & Service Information

The family of Floyd Junior Dickerson created this Life Tributes page to make it easy to share your memories.