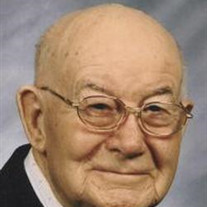 Floyd Staley: Floyd passed away surrounded by his family at his home in Oskaloosa Monday afternoon, August 9, 2004 at the age of 86 years, 8 months and 20 days. Floyd was a member of the Delta Methodist Church and later transferred his membership to the Central United Methodist Church in Oskaloosa. He served on the University Park City Council for 30 years and as secretary for the city one term. In 1986, Floyd received the Governor's Education Volunteer Award for his faithful assistance to fourth grade students at Webster Elementary School. When Floyd was able, he enjoyed doing yard work, attending auctions, antiquing, selling at flea markets and camping with family and friends. He also loved traveling and driving through the small towns and countryside of the Midwest, enjoying the wonder of nature and historic treasurers. Later in his life, spending time with his two granddaughters, Kaila & Kenzie, was his greatest enjoyment. Floyd was a kind and loving husband, father and grandfather. He will live on in the hearts of many, including his wife, Lauralee, his children, grandchildren and his many friends. His kindness and gentleness will be missed by all who loved him. Floyd Clarence Staley, the youngest child of Hallie B. & Nettie Opal Colvin Staley, was born in Mounds, OK on November 20, 1917. The family moved to Mountain View, MO when he was a baby and there, when Floyd was 2 years old, his mother died. The family then moved by covered wagon to Amoret, MO, and finally in 1927 to Worland, MO. There his father died when he was 9 years old. The children were then separated and Floyd went to live with an elderly lady he called ""Grandma"" Payton and her son, Bill in Amoret, MO. Floyd was a 1939 graduate of Amoret High School, and then went to work at the family sawmill. While visiting a friend in Delta, IA, in 1939, Floyd found work at the Home Oil Service Station, and met Lauralee Williams, whose gas tank he often filled. He worked at the station until he entered the Army Air Force on Oct. 8, 1941. After completion of his training at Fort Monmouth, NJ for the U.S Army Air Corps Signal Corp, he was sent to serve in the China/Burma/India Theater where he served as a radio operator in India. Floyd was discharged on Oct. 8, 1945, serving the last six months of his 4 years of service in San Francisco, CA. On July 22, 1945, while still in the service, he married the love of his life, Lauralee Williams. After his discharge, he returned to Delta where he and Lauralee set up house and he managed the Standard Oil Service Station for two years. He and Lauralee then moved to Oskaloosa, where he went to work for R.F. and W.B. Fitch Automotive Wholesale Co., he worked there 7 years. In 1954 he became a salesman and later the assistant manager for the Upton and Colville Firestone Co., which later became Ace Hardware. After 26 years there, Floyd retired in 1980. He, Lauralee and his sister-in-law & brother-in-law, Shirlee and Earnest McBeth became co-owners of Canteen Lunch in the Alley in Ottumwa, IA in 1976. Floyd's memory is honored by his wife of 59 years, Lauralee of Oskaloosa; his two daughters and their husbands, Donna and Larry Logan of Scottsdale, AZ and Bette and Greg Wheeldon of University Park, IA. He was blessed with two beloved granddaughters, Kaila and McKenzie Wheeldon. He is survived by his sister-in-law and brother-in-law, Shirlee & Earnest McBeth of Fremont and a sister-in-law, Edith Staley of Kansas City, KS and many nieces and nephews. He was preceded in death by his parents; his sister, Hilda I Hart; his three brothers, Hubert, Harold and Ben Staley. PDF Printable Version

Floyd Staley: Floyd passed away surrounded by his family at his home in Oskaloosa Monday afternoon, August 9, 2004 at the age of 86 years, 8 months and 20 days. Floyd was a member of the Delta Methodist Church and later transferred his membership... View Obituary & Service Information

The family of Floyd Staley created this Life Tributes page to make it easy to share your memories.

Floyd Staley: Floyd passed away surrounded by his family at his...

Send flowers to the Staley family.