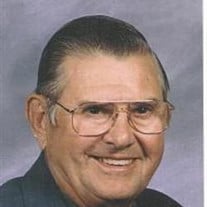 Floyd William Veerman: Bill Veerman passed away at his home in Oskaloosa Saturday morning, Sept. 6, 2003 at the age of 75 years and 21 days. Bill's memory is honored by his wife, Martha Veerman of Oskaloosa; two sons & daughters-in-law: Mark & Cynthia Veerman of Powell, OH and Brett & Lori Veerman of Madison, WI; and a daughter, Kaiya Roessler of Seattle, WA. He was blessed with 4 grandchildren: Brent & Melissa Veerman and Courtney and Jordan Veerman. He is survived by three sisters and a brother-in-law: Henrietta & Neal Newenhouse, Artie Van Roekel and Helen Carriker, all of Oskaloosa. Floyd William Veerman, youngest of 10 children born to Herman & Elizabeth Van Rees Veerman was born August 15, 1928 in Oskaloosa. He was a 1947 graduate of Oskaloosa High School. He worked as a pipe fitter with Midwestern Construction Co. prior to entering the Army on Dec. 4, 1950; he served until Nov. 14, 1952. Bill married Martha Jane Gable on March 8, 1953 in Oskaloosa. Iowa Southern Utilities in Eddyville, IA then employed him in maintenance from 1953 until the time of his retirement in 1991. Bill loved farming, vegetable gardening, hunting and ""tinkering"" with equipment. He was a member of the Central United Methodist Church, the American Legion and the Elks Lodge. Bill was preceded in death by his parents, 4 brothers: Herman, John, Roy, and Ernest and 2 sisters: Nellie Talbert and Dorothy McCombs. PDF Printable Version

The family of Floyd William Veerman created this Life Tributes page to make it easy to share your memories.

Floyd William Veerman: Bill Veerman passed away at his home in...

Send flowers to the Veerman family.