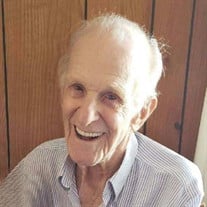 Frank Nienkerk, 90, of Oskaloosa and formerly of New Sharon, passed away Wednesday, October 13, 2021, at Mahaska Health Hospital in Oskaloosa. Frank Milo Nienkerk, son of Quintin Orville and Vera (Squires) Nienkerk, was born March 13, 1931, at his parents' rural home near Pipestone, Minnesota. He attended a country school near his home through 2nd grade, and then the family moved to Adrian, MN, and later Worthington, MN, where he graduated from high school in 1949. While in high school, Frank worked as a carpenter's assistant, and after graduation, he continued working as a carpenter. His next job was with Proudy Wholesale Grocery, a place he worked for 13 years. In the 1960's Frank got his start with the Harvestore Feed Processing System when he was hired by Hawke & Company, an A.O. Smith Harvestore dealership, as a salesman in Worthington, MN. Frank took a break from selling Harvestores for 12 months; during that time, he helped a friend operate his Phillip 66 full-service station. When his friend returned to the station, Frank was hired by Frake & Strothman, Inc. Harvestore Systems out of Iowa City and sold systems in Iowa. Frank bought a farm near New Sharon in 1987, and since his retirement, he spent his days improving the property and enjoying the beauty and peacefulness of country life. He also enjoyed traveling to Florida during the winter months for several years. Frank's family includes his children: Melanie (Dave) Naughton of Marshall, MN, Jeff Nienkerk of New Sharon, Patrick (Jamie) Nienkerk of Oskaloosa, and Michelle of Colorado. He was blessed with 12 grandchildren and eight great-grandchildren. He is also survived by two sisters: Helen Hartman of Auburndale, Florida and Vera Jean Messer of Lakeland, Florida. In addition to his parents, Frank was preceded in death by his brother, Merle Nienkerk. Visitation for Frank will begin Monday, October 18, 2021, at 11 a.m. at Langkamp Funeral Chapel and Crematory in Oskaloosa. The family will be present from 4-6 p.m. to greet visitors. As were Frank's wishes, his body will be cremated following visitation, and a private family burial of his ashes will occur at a later date. Langkamp Funeral Chapel has been entrusted with the arrangements.

The family of Frank Nienkerk created this Life Tributes page to make it easy to share your memories.

Frank Nienkerk, 90, of Oskaloosa and formerly of New Sharon,...

Send flowers to the Nienkerk family.