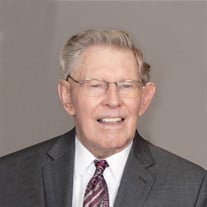 Garlyn Engelhoven, 92, of Oskaloosa, passed away Friday, October 22, 2021, at the Mahaska Health Hospice Serenity House in Oskaloosa. Garlyn Allen Engelhoven, son of Evert and Willena (Plette) Engelhoven, was born January 21, 1929, in Oskaloosa, Iowa. He attended country school No. 6 in Spring Creek Township through the eighth grade and then helped his father on the family farm. February 22, 1949, Garlyn married Evelena “Irene” Rozenboom at the First Christian Reformed Church in Oskaloosa. They made their home in Oskaloosa. A double tragedy soon struck the family, within months of each other their two sons, Vernie and DeVern, passed away, and several months later, their home was lost in a fire. Garlyn was inducted into the Army on December 15, 1954. He was stationed near Tacoma, Washington, where he served for two years. After his discharge, Garlyn and Irene returned to Iowa for three years and then moved to Colorado, where Garlyn was employed by Samsonite Luggage. Later, he was hired by the US Postal Service and delivered the Rocky Mountain News at night. Garlyn and Irene lived in Colorado for 20 years before returning to Iowa in 1980. They initially settled on an acreage near Tracy and later moved into Oskaloosa. After returning to Iowa, Garlyn was again hired by the Post Service, he served the post office a total of 32 years. Since returning to Iowa, Garlyn has been a member of the Central Reformed Church, where he served as an elder and a deacon. Garlyn enjoyed singing and, for over 20 years, was a member of the Men’s Gospel Singers. His love of music also prompted him to take piano lessons at a late age. He and Irene enjoyed traveling; their trips took them to Alaska, Mexico, Europe, Hawaii, Israel, and several other islands. Garlyn’s family include his wife, Irene of Oskaloosa; his daughters: Donna (Phil) Groenendyk of Pella and Debbie (Daryl) Van Wyngarden of Oskaloosa; his grandchildren: Ryan (Nicole Anderson) Groenendyk, Ross (Jess DeNooy) Groenendyk, Chris (Jess Vitale) Groenendyk, Jason Eveland, Kristen (Paul) Toppin, and Jonathan Eveland; great-grandchildren: Ally, Easton, Kasen, Beckett, Kynlee, Ainsley, Tryce, Zion, Landen, Zackery, Nathaniel, Hadley, and Vera. He is also survived by a brother, Byron Engelhoven, and three sisters-in-law: Nadine Rozenboom, Luella Nieuwsma, and Gerri Ozinga. In addition to his parents, his two sons, and a son-in-law, Verlan Eveland, Garlyn was preceded in death by his mother and father-in-law, John and Rena (Vonk) Rozenboom, a sister and brother-in-law, June and Melvin Vonk, two sisters-in-law, Evelyn Engelhoven, and Dorothy (Sybren) Ryken; three brothers-in-law: Melvin Ozinga, Arvin Nieuwsma, and Donald Rozenboom; a niece, Sandra Ozinga and a nephew, Loren Engelhoven. Funeral Services for Garlyn will be held at 10:30 a.m., Tuesday, October 26, 2021, at Central Reformed Church, with Reverend Jon Nelson officiating. Burial will be in Evergreen Cemetery near Leighton with Military Honors by the Oskaloosa Honor Guard. Visitation will begin at 11 a.m., Monday at Langkamp Funeral Chapel. The family will greet visitors from 4-6 p.m., Monday evening. Memorials can be made to the Mahaska Health Foundation, directed to Hospice Services.

The family of Garlyn Engelhoven created this Life Tributes page to make it easy to share your memories.

Send flowers to the Engelhoven family.