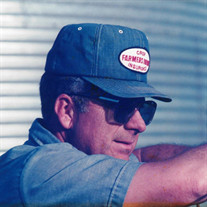 Garon Cady, 79, of Eddyville, passed away Wednesday, November 11, 2020, at his home in Eddyville. Garon Laverne Cady, son of Harold Milton and Mary Leona (Cleveland) Cady, was born on September 12, 1941, at Fort Madison, Iowa. Upon completion of his education, Garon joined the United States Navy. After serving four years, Garon was honorable discharged on September 10, 1963. Garon returned to Iowa and soon met and married Alberta Alice Denato on March 27, 1964. They lived in Albia for a brief time before purchasing their farm near Eddyville. Garon truly enjoyed farming and working in the great outdoors; he also used his skills as a pipe fitter at the VA Hospital in Knoxville. Garon was a member of the First Christian Church in Albia and the Southern Iowa Tractor Club. He enjoyed tractor rides and Sunday rides in their Corvette. His greatest joy in life was being with his family and working with his grandchildren. Garon’s family includes his wife, Alberta of Eddyville; his two daughters: Colette (Greg) Scott of Oskaloosa and Christine (Lance) Schoening of Runnells; three grandchildren: Nick (Taylor) Scott, Heather (Brad) Swank, and Harrison Schoening; four great-grandchildren: Willow, Sage, Bentley, and Virginia; a half-sister, Barb (Steve) Helscher of Tiffin; and a half-brother, Gene Williams of Cedar Rapids. Garon was preceded in death by his parents, Harold Cady and his mother, Mary Williams, and his mother-in-law and father-in-law, Silvio and Alberto Denato. Funeral Services for Garon will be held at 10 a.m., Tuesday, Nov. 17, at Coal Creek Cemetery. The Oskaloosa Honor Guard will present Military Honors. Visitation will be held from 11 a.m. to 6 p.m., Monday at Langkamp Funeral Chapel. According to the rules put in place by the Iowa Department of Public Health, proper social distancing and appropriate personal protective equipment are advised for attending this public event. The service will be available to view on the Langkamp Funeral Chapel’s YouTube channel Tuesday afternoon for those unable to attend the ceremony. Memorial contributions can be made to the Coal Creek Cemetery Association.

The family of Garon Cady created this Life Tributes page to make it easy to share your memories.

Send flowers to the Cady family.