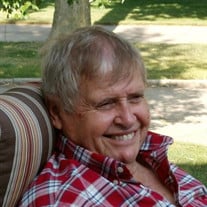 Gary Walker, 83, of Oskaloosa passed away early Thursday morning, April 16, 2020, at his home in Oskaloosa. Gary Leigh Walker, son of Earl and Dorothy (Blake) Walker, was born, April 10, 1937, in Oskaloosa, Iowa. He attended East Center and West Center Country Schools in Mahaska County and was a 1955 graduate of Oskaloosa High School. As one of ten children, he learned early on the value of hard work. Following his education, Gary worked with his father on road construction; he later farmed the family farm and worked for Hanson Construction. He married Donna Garrett in 1957, and three children were born to this union. They later divorced. Gary farmed near Albia and New Sharon before moving near Searsboro in 1961, he farmed there and remained for 39 years. December 6, 1968, Gary married Virginia “Ginny” Irene Grimm in Littleton, Colorado. They purchased two more farms near Searsboro and lived there until 2002. Gary had a passion for cars and motors, and in 1984, he began restoring cars; he enjoyed Buicks particularly. This hobby grew to be a business; over the years, he restored over 30 cars, the 1954 Buick was his favorite. Many times his cars would win first place in auto shows. He served on the board of directors for the Des Moines Chapter of Antique Automobile Club of America. In 2002, he was recognized on the back cover of the Kiplinger Personal Finance magazine for auto restoration. This article soon went “viral” and was reproduced in several newspapers all over the country and in “Living in Iowa” on IPTV. Many farm magazines also wrote their own stories about Gary’s auto restoration. In January 1998, Gary and Ginny purchased the McNeill Stone Mansion on C Avenue East in Oskaloosa, the first step in their seven-year venture of restoring the mansion to its original grandeur. To preserve the home, they opened a bed and breakfast in 2003 with a couple of bedrooms available to guests. They continued to work until they had five rooms available. Gary and Ginny, the perfect team, did most of the work in the restoration, furnishing, and decorating the mansion themselves. Gary enjoyed many hobbies, but in his heart, he was first a farmer. He practiced farming with the same philosophy as he did his hobbies, “Leave it better than how you found it.” In 1986, he was awarded Second Place in the National Corn Growers Association for 209 bushels an acre. Gary’s family includes his wife of over 51 years, Ginny of Oskaloosa; a daughter, Kathaleen Behr of Wickenburg, AZ; two sons: Jeff (Kathy) Walker of Wickenburg, AZ and Randy (Brenda) Walker of Oskaloosa; ten grandchildren and numerous great-grandchildren; siblings and their spouses: Dorothy “Dot” and Gary Van Dyk of Minneapolis, MN, Karen and Jack Bowen of Oskaloosa, Mary Sue Sigler of Oskaloosa, Stephen and Janet Walker of Oskaloosa, Linda Walker, and Peggy Walker both of Oskaloosa. In addition to his parents, he was preceded in death by three sisters: Marilyn, who died at age four, LuGene DeJong and Joyce Fox, and two brothers: Earl and David Walker. Due to Covid-19 restrictions, private funeral services for Gary will be held on Saturday, April 18, 2020, with Rev. Molly Goodrich of the First Christian Church officiating. Burial will be in Forest Cemetery. Langkamp Funeral Chapel has been entrusted with the arrangements. Memorial contributions can be made to the Mahaska Health Foundation for Hospice Services.

The family of Gary Leigh Walker created this Life Tributes page to make it easy to share your memories.

Send flowers to the Walker family.