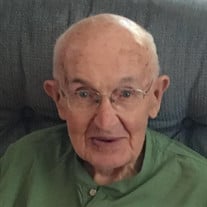 George C. Blake Jr., 91, of Oskaloosa passed away Saturday evening, March 10, 2018, in hospice care at the Mahaska Health Partnership in Oskaloosa. George was born June 26, 1926, at the Mahaska Hospital in Oskaloosa, Iowa. His parents were George C. and Margaret (Cole) Blake. He attended Jefferson Grade School and then continued his education through high school in Oskaloosa, graduating with the class of 1944. When George was 12 years old, he mowed yards, shoveled snow, and fired furnaces for 50 cents a week. He also carried papers for the Des Moines Register. Then, at the age of 13, he went to work for Earl Walker as his hired man on Earl’s farm. He left Earl’s employment at age 18 when he enlisted in the Navy. After his discharge, he returned to Oskaloosa and worked for the freight docks for Rock Island and M & SL Railroads in the winter months and then went back to work for Earl Walker in the spring for two years. November 20, 1949, George married Pauline Robbins. She was the wind under his wings. George farmed for three years and then moved to town in Oskaloosa. He worked for Oskaloosa Ice and Oskaloosa Bus and Transfer for a time and then drove a semi for Rock Island Motor for 24 years until his retirement at the age of 57. George was a volunteer fireman for 15 years in Oskaloosa. He coached the Lions in Little League and pitched softball for 21 years in Oskaloosa, Tracy and What Cheer. He had a large garden, and both he and Pauline canned a lot of vegetables and also gave lots of produce to family and friends. He was a skilled handyman. He and Pauline bought properties to remodel and rent to families for many years. He built his home and a home for his son, Kevin and completed all these tasks working nights and weekends, after long days at work. He also put an addition on Deb’s home and helped Mike with numerous projects. George had a passion for fishing and loved river, pond, and ice fishing. He fished at Murray Sytsma’s pond for 26 years, and when they rebuilt Red Rock dam, he and Pauline bought a piece of ground along the river by the Belle Fountain bridge. He built a cabin there and had 30 years of wonderful memories with his children and grandchildren. He leaves behind his wife of 68 years, Pauline and their three children: Mike (Sharman) of West Des Moines, Deb (Tom) Overbergen of Pella, and Kevin (Sally) Blake of Oskaloosa; seven grandchildren: Julie (Mike) Van Utrecht, Heidi (Matt) Hennig, Jennifer (fiance’, Lane Matice) Overbergen, Lindsey (Brett) Herny, Blair (Alison) Blake, Grant Blake and Steven (Miranda) Overbergen; and nine great-grandchildren: Mackenzie Overbergen, Lexi and Maddie Van Utrecht, Blake, Brody, and Boston Herny and Cash and Heath Hennig and Sawyer Blake. In addition to his parents, he was preceded in death by his six sisters: Edna Linville, Grace Thompson, Bernice Sharp, Dorothy Moore, Mae Klingler and Elizabeth Rust. Funeral Services for George will be held at 10:30 a.m., Friday, March 16, 2018, at Langkamp Funeral Chapel. Military honors will be conducted by the Oskaloosa Honor Guard. As was his wish, his body will be cremated following the service and burial of his ashes will be at 3:30 p.m., Friday afternoon in Forest Cemetery. Visitation will begin at 11 a.m., Thursday at the Langkamp Funeral Chapel; the family will greet visitors from 5-7 p.m. Memorial contributions can be made to MHP Hospice Serenity House.

George C. Blake Jr., 91, of Oskaloosa passed away Saturday evening, March 10, 2018, in hospice care at the Mahaska Health Partnership in Oskaloosa. George was born June 26, 1926, at the Mahaska Hospital in Oskaloosa, Iowa. His parents were... View Obituary & Service Information

The family of George C. Blake Jr. created this Life Tributes page to make it easy to share your memories.

Send flowers to the Blake family.