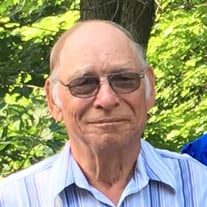 George Kraber, 77, of Bussey, passed away Wednesday, October 28, 2020, at the Mahaska Health Hospital in Oskaloosa, Iowa. George Kraber, son of Emil and Johannah (Keegel) Kraber, was born July 7, 1943, in Eddyville, Iowa. George grew up on the family farm near Eddyville and attended a one-room country school. After his education, George moved to the Waukee area and began a mechanic career in the automotive industry. In 1971, George moved back to the Bussey area and began his Vermeer Manufacturing career as a mechanic. He later moved up to the position of a machinist. George loved to restore tractors. He especially enjoyed working on Farmall tractors. He also enjoyed driving in tractor rides. George’s real love was his family. He always looked forward to seeing his grandchildren and loved to babysit them. He will always be remembered as a kind, caring, and great helper to all. George is survived by his two sons, Dennis (Shari) Kraber of Minneapolis, MN, and Raymond Kraber of Wellington, FL; his grandchildren, Ryan, Jonathan (Rayne), and Rachel Kraber all of Minneapolis, MN, and Ben Kraber of Wellington, FL, his siblings Casey Ann Dowd of Moravia, IA, Clarence Kraber of Ottumwa, IA, Lawrence (Nikki) Kraber of Oskaloosa, IA, Connie Kraber of Oskaloosa, IA, Mary Brennan of Carlisle, IA, JoAnn Gladson of Des Moines, IA, Agnes Fields of Rock Hill, SC, and also the mother of his children, JoAnne Patton. Besides his parents, George was preceded in death by his two sisters, Ellen Plants Wright and Bonnie Rebarcak, and his two brothers, Emil Kraber Jr., and Ed Kraber. Visitation will be held from 12 p.m. to 6 p.m., Monday at Langkamp Funeral Chapel. According to the rules put in place by the Iowa Department of Public Health, proper social distancing and appropriate personal protective equipment are advised for attending this public event. Private family graveside services will occur at the Pringle Cemetery. Memorial contributions can be made to Mahaska Health Hospice Serenity House.

George Kraber, 77, of Bussey, passed away Wednesday, October 28, 2020, at the Mahaska Health Hospital in Oskaloosa, Iowa. George Kraber, son of Emil and Johannah (Keegel) Kraber, was born July 7, 1943, in Eddyville, Iowa. George grew up on the... View Obituary & Service Information

The family of George Kraber created this Life Tributes page to make it easy to share your memories.

Send flowers to the Kraber family.