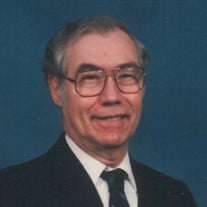 Glen Plate, 86, of Oskaloosa, passed away Wednesday, December 9, 2020, at Northern Mahaska Nursing and Rehab Center in Oskaloosa. Glen Albert Plate, son of Evert and Lucille (Black) Plate, was born June 28, 1934, in Mahaska County, Iowa. After graduating from Oskaloosa High School in 1952, he worked in the parts department at Green’s Ford, which later became Carriker Ford. After 22 years with the garage, he was hired at Vermeer in 1974. He worked there for 23 years and retired in 1997. Glen was united in marriage to Charlotte “Peggy” Jones on August 27, 1954, at the Barnes City Christian Church. Glen was happiest when he felt useful, and in the early years of their marriage, he helped Peggy’s dad farm near Barnes City in addition to his job at the garage. In his retirement years, he enjoyed helping his daughter and son-in-law at their store, Modern Floor Covering. Glen was a member of the Gateway Church of the Nazarene; he served as the treasurer and financial secretary for several years and served on numerous boards. He enjoyed deer hunting and fishing with family and friends in his spare time, and the church league softball. He especially enjoyed watching his grandkids and great-grandkids in whatever they were involved. He always planted a large garden and shared its bounty with family and friends. Glen’s word was his bond, and he was a very loyal friend. Those left to cherish his memory are his wife, Peggy of Oskaloosa; a daughter, Marcy (Denny) Bryan of Oskaloosa; a son, Mike (Kathy) Plate of University Park; nine grandchildren: Melissa (Dennis) Vasconez of Ottumwa, Michelle (Corey) Holland of Pella, Matthew (Melanie) Bryan of Oskaloosa, Amber Thompson of Victor, Nick Thompson of Oskaloosa, Shelby Talbert of Brooklyn, Ashley Bryan of Oskaloosa, Megan (Lawrence) Wallace of Oskaloosa, and Jeremy (Vanessa) Plate of Oskaloosa; 14 great-grandchildren; his siblings: John (Margaret) Plate of Oskaloosa, Gene (Darlene) Plate of Sun City, AZ, Robert Plate of Oskaloosa, Howard (Elaine) Plate of Lodi, WI, and Ivan (Joaquina) Plate of Des Moines. In addition to his parents, Glen was preceded in death by a sister, Sallie DeGeest and her husband, Larry; and a brother, Leonard Plate and his wife, Joyce; a sister-in-law, Gloria Plate; and two infant brothers, Dean and Edward Plate. Glen's funeral service will be held at 10:30 a.m., Saturday, January 2, 2021, at the Gateway Church of the Nazarene, with Pastor David Brown of the Omega Church officiating. Burial will be in University Park Cemetery. Glen had a special place in his heart for kids; memorial contributions may be made to the Glen Plate Memorial for Children's Special Needs.

The family of Glen Plate created this Life Tributes page to make it easy to share your memories.

Send flowers to the Plate family.