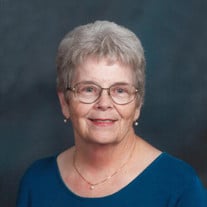 Glenna Boughton née Ballinger, 86, of Mantorville, Minnesota, and formerly of Lacey, Iowa, passed away peacefully at Methodist Hospital in Rochester, Minnesota, on October 2, 2020. Glenna was born on October 6, 1933, to Glen and Georgia (Ward) Ballinger in Lacey, Iowa. She graduated from Lacey High School in 1951 and later from Northeast Iowa Community College with a Respiratory Therapy certificate. She married Glen Boughton on November 23, 1952. To this union, four children were born. They later divorced. When the boys were young, she participated in Cub Scouts with them, taught piano lessons, and was a seamstress for ladies in the community. After the divorce, she was a cook at the elementary school in New Sharon for a year before moving to Dubuque, Iowa, where she again studied respiratory therapy. She was a respiratory therapist at Southwest Health Hospital in Platteville, WI for a year after she graduated, but was then hired by Finley Hospital in Dubuque, Iowa. She stayed at Finley Hospital until she retired in 2000. She was an avid biker beginning in New Sharon with her friend Nancy Harrison and later with the Gourmet Bike Club in Dubuque. She took her love of biking on several RAGBRAI, TOMRV, SAGBRAW, rides, and many weekend trips with the Gourmets. She had a beautiful alto voice and could play guitar, piano, organ, and handbells. She served Lacey Church with her voice and organ skills, and St. Luke’s Church with her voice and on bells in the handbell choir. She loved to sing and spent many years singing and traveling with the Dubuque Chorale. As a group, they toured several countries in Europe, Australia, and New Zealand. Glenna had a huge heart and used her talents to serve others. She has been active in United Methodist Women and spent countless hours cooking (she was an amazing cook and baker) and working in both churches she attended. Her love of people and travel sent her on several United Methodist Volunteers in Mission Program trips to Russia to work at Orphanage #4 in St. Petersburg. The children there left a huge mark on her heart, and she treasured the collage of their photos her friend, Morgan Frazer, made for her. After moving back to Lacey, she rediscovered her love of flower gardening and spent many hours planting flowers, bushes, and trees around her house and yard to attract butterflies and simply bring her joy. She enjoyed rekindling old friendships in the Lacey, New Sharon, Oskaloosa area. She and her sidekick, Lenore, enjoyed their visiting rounds checking in on everyone. She loved her family deeply. Glenna is survived by her children: Paul (Andrea) Boughton, Ankeny, IA, Larry (Diane) Boughton, Montezuma, IA, David (Sheryl) Boughton, Williamsburg, IA, and Lisa (Robert) Kramer, Mantorville, MN; her grandchildren: Kendle (Cody Sadler) Boughton, Shiloh Boughton, Tyler (Kelsey) Boughton, Cherann (Zach) Foltz, Alisha Boughton, Jonathen Boughton, and Nathaniel Kramer; her great-grandchildren: River Earley, Eloise Boughton, and Jett Boughton; and two special daughters from other mothers: Cindy Folsom and Lorie Foley. In addition to her parents and her former husband, Glen, Glenna was preceded in death by her brother and sister-in-law, George and Dorothy Ballinger. Private funeral services will be held for Glenna, and burial will be in Forest Cemetery. Memorial contributions can be made to Lacey United Methodist Church or St. Luke’s United Methodist Church. Langkamp Funeral Chapel has been entrusted with her final arrangements.

The family of Glenna Boughton created this Life Tributes page to make it easy to share your memories.

Send flowers to the Boughton family.