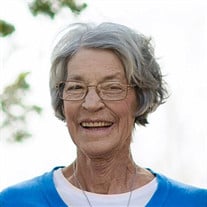 Gloria Eveland, 68, of Oskaloosa passed away Sunday, November 24, 2019, at the Mahaska Health Hospice Serenity House in Oskaloosa. Gloria Diane Hoksbergen Eveland was born the second of five children to Albert and Junella Nieuwsma Hoksbergen on October 15, 1951, in Oskaloosa, Iowa. She was raised on a dairy farm near Tracy with her parents, siblings, and Aunt Junella (Hoksbergen) Crake, and attended Pella Christian Schools. Following her graduation, she moved to Michigan, where she earned her LPN at Pine Rest School of Nursing. She moved back to Iowa and was united in marriage with Arvin Eugene Eveland on March 11, 1977. To this union were born two daughters: Sara Diane and Brenda Jean. As a nurse, Gloria loved teaching her patients. She first worked as a nurse in Grand Rapids, Mich. At the Mahaska County Hospital, she became known as a wound management expert. She went on to become the manager of Hammer Medical Supply in Oskaloosa. She finished her career as a nurse in Knoxville and working as a pharmacy technician in Pella. Anyone who knew Gloria knew she was a doer. She started a local support group for those with ileitis and colitis, participated in her church (Bethel CRC), and worked on the farm. Maybe you knew her painted barn quilts, seamstress handiwork, or her cookies (that were available any time). Her grandchildren remember their times fondly on the farm at Grandma Camp with her cows (who came when she called), her crafts, and the best hugs. Though Crohn’s Disease was a constant in her life, many could not keep up with her, and she never considered herself a victim. She lived every day to its fullest, full of energy and smiles. Her body may have broken down, but her spirit will live on. Those left behind to cherish her memory include her husband, Eugene; her daughters, Sara (Daniel) McCue of Grinnell and Brenda (Timothy) Morrow of Altoona; her grandchildren, Slane, Johanna, and Graeme McCue and Ella and Zaden Morrow; her brothers, Kenneth (June) Hoksbergen of Pella, Carroll (Kathy) Hoksbergen of Pella, and Dean Hoksbergen of Oskaloosa; brothers-in-law, Duane (Elaine) Eveland of Oskaloosa and Bill (Lois) Van Weelden of New Sharon; sister-in-law, Debbie Eveland of Oskaloosa; father-in-law, Warren Eveland of Oskaloosa; and many aunts, uncles, cousins, nieces and nephews. She was preceded in death by her parents; mother-in-law, Adeline Eveland; sister, Gail (Hoksbergen) Van Weelden; sister-in-law, Carol Hoksbergen; and brother-in-law, Verlan “Fish” Eveland. Before Gloria passed, she had some requests. One was to give money — not flowers! If you choose to make a gift in Gloria’s memory, please make it to African Inland Mission in care of Rachel Williams or Mission Uganda. Funeral Services for Gloria will be held at 10:30 a.m., Monday, December 2, 2019, at Bethel Christian Reformed Church with Pastors Doug Van Der Pol and Jonathan Eveland officiating. A family prayer service will be held in the church fellowship hall at 10:15 a.m. before the ceremony. Burial will be in Weldon Cemetery. Visitation will begin at 10 a.m., Sunday, at Langkamp Funeral Chapel; the family will greet visitors from 2-5 p.m.

The family of Gloria Eveland created this Life Tributes page to make it easy to share your memories.

Send flowers to the Eveland family.