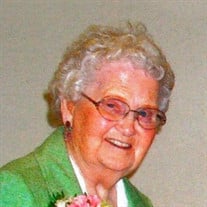 Goldie R. Boese, 94, of Oskaloosa passed away Friday, August 9, 2019, at the Oskaloosa Care Center. Goldie Rebecca Boese, daughter of John Wilbur Severn and Edna Ethel Carmen, was born January 30, 1925, in Council Bluffs, Iowa. She was a 1943 graduate of Glenwood High School. After graduating, Goldie began teaching country school in Pottawattamie and Mills County. During this time, she felt called by God to go as a missionary to Nigeria, West Africa. She began her missionary training at Bethel College in Mishawaka, Indiana and received her B.A. and then her B.S. from Goshen College in Goshen, Indiana. After completing her education, Goldie traveled to Nigeria in 1953 with the United Missionary Society, serving as the principal of Hausa Bible School in Zura. She served on five different tours to Nigeria for 22 years. In 1974, Goldie returned to Council Bluffs. It was at that time that she began teaching at the Glenwood State School. May 26, 1979, Goldie married Robert Leslie Boese. In 1987, they moved to South Dakota, where Goldie did substitute teaching for 13 years before moving to Oskaloosa, IA in 2000. Goldie enjoyed spending time with her family and friends and all aspects of music. Her entire life, she was involved in her church and taking part in its activities. She was active in Stonecroft Ministries in South Dakota and Oskaloosa, Iowa and Gideon Ministries. Goldie’s family includes her step-son, William & Valerie Boese from Dixon NE, her two step-daughters: Betty & Lynn Kaufman of University Park IA and Rebecca & Sam Barber of Belize City, Belize, South America; 12 grandchildren and eight great-grandchildren and expecting one more; one sister, Ila Marie Lee of Newton KS; and several nieces and nephews. Besides her parents, Goldie was preceded in death by her husband, one sister, Pearl Petersen; and five brothers: Clayton, Elmer, John, Lyman, and Herbert. Funeral Services for Goldie will be held at 10:30 a.m., Monday, August 19, at Langkamp Funeral Chapel in Oskaloosa with Pastor Douglas Smiley of the Calvary Bible Church. Visitation will begin at 10 a.m., Sunday; the family will greet visitors from 3 to 5 p.m. at the funeral chapel. Burial will be in University Park Cemetery. Memorial contributions can be made to the Gideons International. Arrangements entrusted to Langkamp Funeral Chapel.

The family of Goldie R. Boese created this Life Tributes page to make it easy to share your memories.

Send flowers to the Boese family.