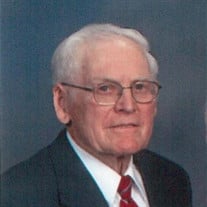 Goosen Van Utrecht, 94, of Oskaloosa and formerly of New Sharon died September 19, 2018, at Northern Mahaska Specialty Care in Oskaloosa. Goosen “Goos” Cornelius Van Utrecht was born June 5, 1924, in Rossum, the Netherlands to Adrianus and Antje (Vander Zalm) Van Utrecht. He attended school in Rossum, and after his education, he worked for two years in the local brick factory. He then took a job as a hired man with a farmer, Arie MacLeane, whose farm was only a mile from his home in Rossum. In 1943, after the Nazi’s invaded the Netherlands, they seized Goos and took him to Ludenscheid, Germany where he worked in a prison camp factory until the end of the war. Goos lived behind bars on the 7th floor of the factory and food was so scarce, and of such poor quality, that Goos almost starved to death. From D- Day, June 6, 1944, to April 13, 1945, no packages with food or correspondence would arrive from family. After the liberation, Goos traveled by truck back to Rossum – this trip took him a month and was filled with danger and hardship; a walk through a minefield was one of the perils that he endured. The day he arrived home, he learned that his former employer’s wife, Neeltje MacLeane, had been buried that day and her husband, Arie had died several months earlier. Goosen soon resumed his job on the MacLeane farm and in the midst of all the heartache and hardship that followed the war, he was blessed to find the love of his life, Jane MacLeane, the pretty “farmer’s daughter.” Goosen and Jane were married July 14, 1948, in Rossum, but within four months they were on their way to America. They arrived in Iowa with $100.00 in their pocket and a heart overflowing with hope. The goodness of American/Dutch sponsors brought them to the Oskaloosa/New Sharon area. They eventually purchased the farm in 1960 and lived there until his health required a move into Oskaloosa in December 2016. Goos loved the farm; he milked cows, raised chickens and hogs and had a large vegetable garden in addition to field crops. Goos’ passion was work, he enjoyed all kinds of manual labor including digging ditches, operating a scythe, pitching manure and shoveling grain. He was a member of Central Reformed Church, where he had served as a deacon and an elder and also was a member of Farm Bureau. Goosen’s family includes a daughter, Nellie (Dick) Drost of Oskaloosa; sons: Andrew (Lois) Van Utrecht of New Sharon, Phillip (Phyllis) Van Utrecht of Oskaloosa, and Steven (Vickie) Van Utrecht of New Sharon; thirteen grandchildren: Ben (Cori) Drost of Oskaloosa, Bert (Lisa) Drost of West Des Moines, Tim (Amanda) Drost of Oskaloosa, David (Angie) Van Utrecht of Bettendorf, Iowa, John (Teresa) Van Utrecht of Ottumwa, Matthew (Jil) Van Utrecht of New Sharon, Sarah (Josh) Hawk of New Sharon, Katie (Bob) Olvera of Olathe, Kansas, Jennifer (Andrew) Groenenboom of Oskaloosa, Laura (Nick) Anderson of New Sharon, Mike (Julie) Van Utrecht of New Sharon, Melissa (Brandon) Bandstra of New Sharon and Brian (Whitnie) Van Utrecht of New Sharon; 36 great-grandchildren and three more on the way. Goosen was preceded in death by his parents; his wife, Jane on March 7, 2013; a brother, Gerrit Van Utrecht, and a sister, Martina (Thies) Van Goor. Funeral Services for Goosen will be held at 10:30 a.m., Saturday, September 22, 2018, at Central Reformed Church with Rev. Jon Nelson officiating. A family prayer service will be held at 10:15 a.m. in the lower level of the church. Burial will be in Forest Cemetery. Visitation will begin after 11 a.m., Friday, at Langkamp Funeral Chapel; the family will greet visitors from 5-7 p.m. Friday evening. Memorials may be made to Central Reformed Church.

The family of Goosen C. Van Utrecht created this Life Tributes page to make it easy to share your memories.

Goosen Van Utrecht, 94, of Oskaloosa and formerly of New Sharon...