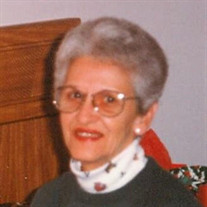 Grace Rebecca Stewart, 87, died at 2:30 a.m., Monday, August 3, 2020, at her home in Oskaloosa. She was born September 26, 1932, in Tracy, Iowa, the sixth of ten children born to Raymond and Jenny (McCombs) Moody. Grace graduated from Russell High School in Lucas County, where she played basketball. Grace married Kenneth Eugene Stewart, December 6, 1953, in Oskaloosa, where they made their home and raised their son, Sam. Through the years, she worked at Lytle Motors and served as a clerk in the Mahaska County Auto Department for many years and sold Avon. Grace was also active in the success and running of the Stonehenge Nightclub, and she and her husband, Kenneth, owned and operated the Little Red Diner in Oskaloosa. Grace was a dedicated, hard-working woman who prided herself on the presentation of herself, her home, and her family. She was very organized and a creature of habit. She was a fine hostess and enjoyed cooking and baking for and doing kind things for others. Grace enjoyed decorating her home for the holidays and special occasions; she hosted many Tupperware and Home Interiors parties over the years. Grace was gracious, but opinionated, and loved talking with others about life situations in general over coffee and a home-baked treat. Her life focus rallied around her family and home; she deemed them her treasures. Grace lived a full life, loaded with a variety of experiences. She and her husband were highly active in American Legion functions and related causes. She was also very busy in a bowling league where she accumulated many patches and awards for her efforts and achievements. Her family includes her son, Sam Stewart of Oskaloosa; grandchildren: Samantha Grace Stewart of Iowa City, Zane Stewart of North English; a step-granddaughter, Jacqueline Stafford of North English; great-grandson, and Jacobi Stafford of North English. She is also survived by her siblings: Raymond “Bud” Moody of Russell, IA, Kenny Don Moody of White House, TX, David Moody of Centerton, AR, Cleo Moody of Columbus, IN, Helen Schrader of Oskaloosa, and Jennie Ethel Dishman of Knoxville. In addition to her parents, Grace was preceded in death by her husband Kenneth of 39 years on July 17, 1992, a sister, Thelma Barnard, and brothers, William and Carl Wayne. Funeral services for Grace will be held at 1 p.m., Friday, August 7, 2020, at Langkamp Funeral Chapel with Rev. Molly Goodrich of the First Christian Church officiating. Burial will be in Highland Cemetery near Eddyville. Visitation will begin at Noon on Thursday; the family will greet visitors from 5-7 p.m. Thursday evening. Memorial contributions can be made to the American Legion.

Grace Rebecca Stewart, 87, died at 2:30 a.m., Monday, August 3, 2020, at her home in Oskaloosa. She was born September 26, 1932, in Tracy, Iowa, the sixth of ten children born to Raymond and Jenny (McCombs) Moody. Grace graduated from Russell... View Obituary & Service Information

The family of Grace Rebecca Stewart created this Life Tributes page to make it easy to share your memories.

Send flowers to the Stewart family.