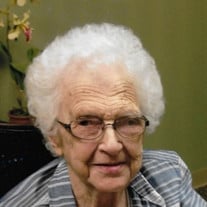 Grace Van Weelden, 95, of Oskaloosa passed away Monday, October 2, 2017, at the MHP Hospice Serenity House in Oskaloosa. Grace Van Weelden, daughter of Gerrit and Dena Rempe Meppelink, was born September 7, 1922, in Sully, Iowa. Grace attended Sully Christian School where she graduated from eighth grade. The family moved to Oskaloosa in 1936, and Grace graduated from Oskaloosa High School in 1941. Grace married Hank Van Weelden January 22, 1942, in Lancaster, Missouri. They made their home on a farm southwest of Oskaloosa. In 1959, Grace began working for Lynn’s Poultry; she remained there for 21 years, working as a bookkeeper for the last several years. She later worked for Zeigler Construction as a bookkeeper, and she finished her working career as a bookkeeper with the Oskaloosa Christian School. Grace was a member of the First Christian Reformed Church in Oskaloosa. She enjoyed sewing, quilting, counted cross stitch, crossword puzzles, reading and watching the Chicago Cubs. Her family includes a daughter and son-in-law, Donna Joyce and Gene Frisby of Pella; a son and daughter-in-law, Henry W. (Willie) and Bonnie Van Weelden of New Sharon; six grandchildren: Kim and Randy Smith of Marshalltown, Michael and Ann Dieleman of Kansas City, MO, Kristy and David Trzeciak of Polk City; Valerie and Brendan Terpstra of Pella, Jennifer and Jeff Baham of San Jose, CA and Melissa and Charlie Bowen of Oskaloosa, IA; fifteen great-grandchildren. Besides her parents, Grace was preceded in death by her husband, Hank, a brother, John Meppelink and two sisters, Klazina Fopma and Eva Schinkel. Funeral Services for Grace will be held at 10:30 a.m., Thursday, October 5, 2017, at the First Christian Reformed Church in Oskaloosa with Rev. Paul Hoekstra officiating. A family prayer service will precede the funeral at 10:15 a.m. in the lower level of the church. Burial will be in Forest Cemetery. Visitation will begin at 1 p.m., Wednesday at the Langkamp Funeral Chapel in Oskaloosa. The family will at the funeral chapel from 5-7 p.m. to greet visitors. Memorials may be made to the Oskaloosa Christian School Music Department. Memories and condolences can be sent to the family by visiting the online guestbook at gvlfuneralchapel.com.

The family of Grace Van Weelden created this Life Tributes page to make it easy to share your memories.