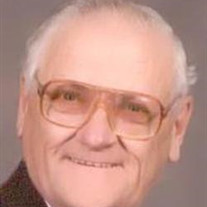 Harold Laverne Kelderman: Harold Laverne Kelderman, 80, of Oskaloosa passed away Thursday evening, April 3, 2003 at Mahaska Hospital in Oskaloosa, at the age of 80 years, 4 months. Harold enjoyed religious and political dialogue and worked very hard in his community to give voice to those that were not being heard. Besides his commitment to being a supportive companion as husband, nurturing and providing father and grandfather, he tirelessly defended the disadvantaged and reached out to the lost. Harold Laverne Kelderman was born on December 3rd, 1922 in Oskaloosa near Lake Keomah to Gerarda(Huge) and Peter T. Kelderman. His childhood was spent in Highland, IN and Lansing, IL. He graduated from Munster Christian Grade and Thornton Fractional High Schools. As a teenager, Harold's first job was with Federal Electric in Chicago. While working at Ottumwa Iron Works as a machinist, in 1943, he was drafted into the Army. He was discharged as a Sgt. from the parachute infantry. He then worked at Iowa Valve (now Clow) as a metal pattern maker, and farmed for one year near Lacey. He was united in marriage to Elsie Marie Brink, February 12th, 1947 and lived to celebrate their 56th wedding anniversary. During his marriage, Harold, operated a building contracting business that ended with the ""Phelps Estates"" condominium in Oskaloosa. He also served 10 years as manager of the Sears Roebuck catalog office. He graduated from William Penn College and went on to serve as principal of the Randolph Christian School in WI, and then as Industrial Technology Instructor at Indian Hills Community College and Evans Jr. High in Ottumwa. He went on to enjoy 25 years as a Real Estate Broker and State Certified Appraiser. He also taught evening classes in Real Estate and Appraising at Indian Hills Community college. Harold served his community as Mayor of Oskaloosa from 1990 -1994. He went on to reunite hundreds of bios and adoptees with his private investigative agency. He enjoyed his years in association with his church, the Jaycees, the DAV, the Board of Realtors and the Kiwanis Club. Besides his travels with his wife and children, he marveled in ham radio, electronics and piloting the 180 Cherokee and the Cessna 172 at the Oskaloosa Airport from 1968 to 1999. His work with the Civil Air patrol was a great joy .and recently served as Squadron MLO. Mr. Kelderman is preceded in death by his father and mother, Peter and Gerarda Kelderman, two brothers, Robert and Richard, all of Oskaloosa. Left to cherish his memory are his wife, Elsie, and their daughters; Nancy of Knoxville, IA; Mary of Madison, WI; their sons: Daniel and his wife, Shirley of Oskaloosa and Harold ""Dennis"" and his wife, MaryAnn of Wichita, KS; 10 grandchildren; three brothers and five sister in-laws: Melvin and Cobie Kelderman of Oskaloosa; Herman and Bernice; Lawence and Marlene Kelderman all of Des Moines; and Anna & Joyce Kelderman of Oskaloosa; two sisters and brother in-law: Viola Groenenboom of Ottumwa and Helen White and her husband, Robert of Scottsdale, AZ; and many cousins, nieces and nephews. PDF Printable Version

The family of Harold Laverne Kelderman created this Life Tributes page to make it easy to share your memories.