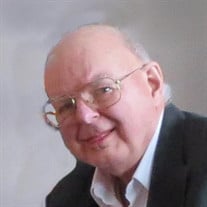 Harry Charles Haupt, age 74, passed away April 24, 2018, at the Mahaska County Hospital in Oskaloosa, Iowa, after a short illness. He was born Sep. 24, 1943, in Nashville, TN, to Joseph Charles Haupt and Alice Francis Haupt and he is survived by his brother Dr. David E. Haupt and his wife Susan T. Haupt of Cedar Rapids, Iowa. Harry was a brilliant student, excelling in the science and music. During the space race of the 1950’s he developed an interest in amateur rocketry, setting an altitude record of 20,500 ft when he was 15 years old. In one rocket he launched a worm roughly 1000 ft and returned it to earth. The passenger survived the trip alive and well. Harry was on the front page of the Des Moines Sunday Register, Picture Magazine, Feb. 8, 1959, and earned the nickname of «Rocketship Harry» in High School, in Spencer, Iowa. In music Harry excelled on the piano and the trombone at an early age. At age 18 he auditioned and was accepted into the United States Air Force Band, the one known as the President’s Band in Washington DC, where he served honorably from 1961-1965. On one tour, though still a teenager, he played a trombone solo with the band. While in the service, he attended American University in Washington, and later the University of Iowa. As a civilian Harry served for several years as a mail carrier in Washington DC. Later he was a taxi driver in San Francisco, and would often brag that he knew every address in the city. Harry also spent a great deal of time in Europe, especially France, and one of his greatest interests was speaking and reading French. He was the first person hired at the Oskaloosa Pizza Ranch in 2003, where he loved the work and was still employed at the time of his death. Harry was a loving, caring person, who would do anything to help others. A funeral service for Harry will be held at 10:30 a.m., Saturday, April 28, 2018, at Langkamp Funeral Chapel with Pastor Alvern Boetsma of the Good News Chapel officiating. Burial will be in University Park Cemetery. Visitation will begin at 10 a.m., Friday, at the funeral chapel; the family will greet visitors from 5-6 p.m. on Friday evening. Memorials can be made to Stephen Memorial Animal Shelter. Memories and condolences can be sent to the family by visiting langkampfuneralchapel.com.

Harry Charles Haupt, age 74, passed away April 24, 2018, at the Mahaska County Hospital in Oskaloosa, Iowa, after a short illness. He was born Sep. 24, 1943, in Nashville, TN, to Joseph Charles Haupt and Alice Francis Haupt and he is survived... View Obituary & Service Information

The family of Harry Charles Haupt created this Life Tributes page to make it easy to share your memories.

Send flowers to the Haupt family.