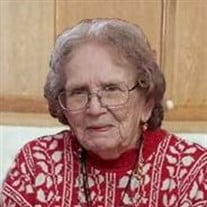 Helen Towns, 90, of Barnes City, Iowa passed away Tuesday, July 17, 2018, at the Mahaska Health Partnership Hospice Serenity House in Oskaloosa. Helen Irene Towns, daughter of William Perry and Bessie Irene (Edwards) Chilcote, was born Dec. 17, 1927, in Ottumwa, Iowa. She was a 1945 graduate of Oskaloosa High School and then furthered her education at the University of Iowa, where she attended for two years. She worked as the secretary for the Juvenile Court System in Belle Plaine for 15 years. She drove a semi-truck for several years with her brothers and sister-in-law, Dale, and Don and Edna, and then served as manager of the Brooklyn 80 Truck Stop. Helen retired in 2008. Helen was a member of the United Methodist Church in Barnes City. She enjoyed quilting, reading, BINGO and card parties. Her family includes her children and their spouses: Robert Towns of Gibson, Iowa, Cheryl Conway of Oskaloosa, Jerry and Elsie Towns of Marengo, Iowa, Larry and Joan Towns of What Cheer, Iowa and Shirley Shaull of Montezuma, Iowa; 14 grandchildren and many great-grandchildren; her siblings and their spouses: Don and Edna Chilcote of Belle Plaine, Iowa, Beverly Chilcote of Belle Plaine, Iowa, Virginia and Todd Harp of Moravia, Iowa, Violet and Bob Jones of Oskaloosa, Harry and Jean Chilcote of Belle Plaine, Iowa and Charles Chilcote and Dave Ohlson of Panama City, Florida; and many nieces and nephews. In addition to her parents, Helen was preceded in death by a grandson, David Towns; and a brother and a sister and brother-in-law: Dale Chilcote and Catherine and Tom Havener. Funeral services for Helen will be held at 2 p.m., Thursday, July 19, 2018, at the Langkamp Funeral Chapel with Rev. David Brown of Omega Church officiating. Burial will be in Forest Cemetery. Visitation will be open from 10 a.m. to 5 p.m., Wednesday; the family will greet visitors from 12:30 p.m. to service time on Thursday. Memorial contributions can be made to Mahaska Health Partnership Serenity House. Memories and condolences can be shared with the family by visiting langkampfuneralchapel.com.

The family of Helen Irene Towns created this Life Tributes page to make it easy to share your memories.

Send flowers to the Towns family.