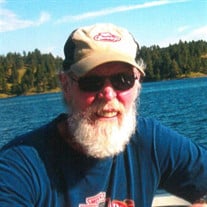 Henry "Hank" Norton, 68, of Oskaloosa passed away Thursday, November 21, 2019, at the Mahaska Health Hospice Serenity House in Oskaloosa. Henry “Hank” Louis Norton, son of Woodrow Trent and Lucille Louise (Kessler) Norton, was born January 25, 1951, in Moline, Illinois. As a child, Hank’s family moved near Drakesville, Iowa, and Hank graduated from Bloomfield High school in 1969. He enlisted in the U.S. Navy, June 24, 1969. Hank served on the U.S.S. Durham, which transported troops out of Vietnam; he was part of six of those missions. During his four years of service, he served on foreign soil or at sea for three years, eight months and 18 days. He was awarded the National Defense Service Medal, the Republic of Vietnam Campaign Medal and the Vietnam Service Medal with two Bronze Stars. He was discharged on June 15, 1973. Hank returned to Iowa and worked for Modern Floor Covering, from which he retired in 2017. He married Debbie Peck, October 14, 1988, in Oskaloosa. He was a past member of the American Legion. During his free time, Hank enjoyed the great out-doors: he loved riding his Harley, fishing, and target practice. Spending time with his family was one of his main priorities. He also “enjoyed blowing up the Energized Bunny – that one last time.” His family includes his wife, Debbie of Oskaloosa; his children: Rebecca Sidebottom of Oskaloosa, April (Dereck) Hormann of Bloomfield, Alissa Norton of Bloomfield, and Victoria (Michael) Belger of Oskaloosa; eight grandchildren: Alexis, Andrew, Cole, Nick, Dylan, Bethaney, Brayden and Bryson; sisters, Carol Greene of Malvern, Iowa and Betty (Jim) Reyes of Bloomfield; and a brother, Charles (Mary Jo) Norton of Camdenton, Missouri. In addition to his parents, he was preceded in death by two brothers: Bill and Don Norton. Graveside Services for Hank will be held at 11:30 a.m., Monday, November 25, 2019, at Forest Cemetery in Oskaloosa with Pastor Brian Bowers of the Gateway Church officiating. Following the graveside service, the family invites you to join them at the American Legion in Oskaloosa, for a time of lunch and fellowship. In lieu of flowers, the family requests memorial contributions to be made to the Wounded Warrior Project.

The family of Henry "Hank" Norton created this Life Tributes page to make it easy to share your memories.

Send flowers to the Norton family.