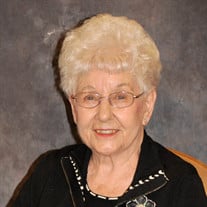 Hester D. Whitlatch, 98, of Oskaloosa, passed away Thursday evening, November 15, 2018, at the Mahaska Health Hospice Serenity House in Oskaloosa. Hester Dieleman Whitlatch was born February 12, 1920, to William R. and Florida (Den Hartog) Dieleman. Early in life, she lived on a farm east of Eddyville, Iowa, with her parents and a brother, Raymond. She attended rural school and graduated from Eddyville High School with the class of 1937. After graduation, she started working at the Eddyville bank and later at the Ottumwa bank. In 1942, she began working at Mahaska State Bank and continued there for 43 years until her retirement in 1985. On March 9, 1943, she was united in marriage to Charles W. Whitlatch at Kirksville, Missouri. They spent their entire married life in Oskaloosa. Hester was a member of the First Christian Church, Christian Women’s Fellowship, Lydia Circle, the American Legion Auxiliary, Elks Lodge, PEO Chapter IO, and Elmhurst Country Club. Hester was an avid sports enthusiast her entire life. In high school, she played softball and basketball. Later in life, she played golf and bowled until ill health forced her to give up those activities. However, she remained an avid supporter of the Iowa Hawkeyes and the St. Louis Cardinals. That never wavered as long as she lived. Hester is survived by many dear friends. In addition to her parents, she was preceded in death by her husband, Charles on May 30, 1981; a special friend, Quentin Fuhs, and her brother and sister-in-law. Funeral services will be held at 2 p.m., Tuesday, November 20, 2018, at Langkamp Funeral Chapel with Rev. Tim Johnson officiating. Burial will be in Forest Cemetery. Visitation will be held from 11 a.m. to 6:30 p.m., Monday at the Langkamp Funeral Chapel. Memorials can be made to Mahaska Health Serenity House or the First Christian Church.

The family of Hester D. Whitlatch created this Life Tributes page to make it easy to share your memories.

Send flowers to the Whitlatch family.