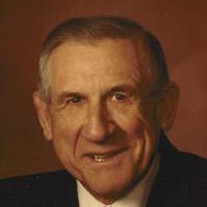 Homer Dwight Gay: Homer passed away late Thursday evening, Sept. 23, 2004 at the Mahaska Hospital at the age of 96 years and 23 days. He is survived by three sons and a daughter and their spouses: Lawrence and Margie Gay of Geneseo, IL; James and Sandra Gay of Washington, IL; David and Sue Gay of Kalamazoo, MI; and Pat and Ted Winegardner of Rose Hill, IA. He was blessed with 10 grandchildren: Steven Gay of Elgin, IL; Pamela (Dennis) Coonfield of Omaha, NE; Marcy (Chris) Cox of Lake Mills, WI; Barbara (Morgan) Murphy of Kokomo, IN; Debra (Robert) Barton of Crystal Lake, IL; Sherry (Mike) Hanrahan of Portland, OR; Bradley Gay of New York City, NY; Dan Gay of Ann Arbor, MI; Matt Winegardner of Iowa City, IA; and Mike (Jill) Winegardner of Lexington, SC. He was also blessed with 10 great grandchildren: Andrew, D J,, Ben and Mike, Kyle and Blair, Elizabeth and Emily, Robby and Joey. Homer Dwight Gay, son of Edwin Orlando Gay and Ida Eliza Ruby Gay, was born August 31, 1908, on a farm in Mahaska County. He lived all his life on a farm until entering nursing care in 2000. He attended country schools for his early grade school education but spend much of his youth working to help support his family. On February 14, 1934, he married Blanche Vivian Elliott. They rented farms for 9 years before settling on their own farm in Monroe Township, north of Rose Hill, in 1943. Homer enjoyed his Angus cattle and Allis-Chalmers tractors. He was a country school director for many years, involved as a leader in 4H clubs, Farm Bureau and the Wymore Cemetery board. During his retirement years, he enjoyed hand crafting many sets of miniature horses and antique farm wagons. He enjoyed his family time with his children, grandchildren and great grandchildren. He took pride in their accomplishments, always thinking of others before himself. He was preceded in death by his wife Vivian in 1991; his parents; four brothers: Orin, Clarence, Walter, and Harold: three sisters: Mabel Charles, Blanche Melvin and Ruby Lane. PDF Printable Version

Homer Dwight Gay: Homer passed away late Thursday evening, Sept. 23, 2004 at the Mahaska Hospital at the age of 96 years and 23 days. He is survived by three sons and a daughter and their spouses: Lawrence and Margie Gay of Geneseo, IL; James... View Obituary & Service Information

The family of Homer Dwight Gay created this Life Tributes page to make it easy to share your memories.

Send flowers to the Dwight family.