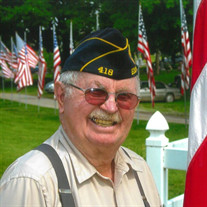 Homer Clarence Ferguson passed on August 13, 2021, at the Serenity House in Oskaloosa. Homer was born on the family farm one mile west of Cedar to Carl and Ethel (Brubaker) Ferguson on December 10, 1924. Delivered by his Aunt Faye, he was proud that he slept almost all his life in the bedroom he was born in as an infant. Homer was the 5th child in the family and attended the Cedar School, where he graduated in 1942. He told stories of running home over lunch to feed animals and making it back to class. In school, he was a basketball manager and played trumpet. His true passion in life was farming. After graduating, Homer worked during the winter at Maytag in Newton, making aircraft parts. Two of his Cedar classmates (Kenny & Marion) and Homer decided to enlist in the Army at the same time. Homer started his service in late 1943, serving in the 111th Infantry Regiment. His service took him to the South Pacific to islands of Saipan, Peleliu group, and Tinian. He had photos of the planes carrying the atomic bombs taking off from Tinian and many photos of the islands during the war. He served as mechanic and bugler during his service, which ended in 1946. Homer returned from World War II in an Army jeep he salvaged and went to work on the family farm with his father. On November 12, 1949, in Oskaloosa, he married Alice Viola (Tesinsky) Ferguson. Alice and Homer were blessed with five children. Homer served as a 4-H leader and was involved with the FFA program at Eddyville, often serving as a welding judge. He was active with many farm groups, including the Mahaska County Pork Producers, Mahaska County Cattlemen’s Association, Farm Family, Mahaska County Soybean Association, Mahaska County Corn Growers Association, and Mahaska County Farm Bureau. As a young farmer, he was honored as a Master Swine Producer. Homer enjoyed serving as a mentor to many young farmers and was actively involved in forming state and federal ag policies. Homer served as the Mahaska County Farm Bureau President and was recognized as a Distinguished Member of Agriculture by the Iowa Farm Bureau. Home also served on the Iowa Soybean Board and was president in 1988, helping to gain approval of the soybean checkoff program. Later, Homer was recognized with a Lifetime Achievement Award from the National Soybean Association. Homer and Alice enjoyed many trips to farm conventions around the country and Beef Improvement Corporation (BIC) tours. In the early 1990s, they traveled with the Iowa Soybean Association on a European Marketing Tour to learn about agriculture in Europe. Homer and his son, Joe, hosted many delegations of ag leaders from Russia, Italy, and South America at the farm. His tractor of choice was green. Homer was also a member of the Mahaska County Republicans, Eddyville American Legion, VFW in Oskaloosa, Farm Service Board, Nelson Pioneer Farm, Oskaloosa Chamber of Commerce, and Harrison Township Trustee. He greatly enjoyed the weekly summer city band concerts in the park and going to the senior citizen center. Time spent fishing in Canada and at the family farm pond with grandkids fishing were the highlights of the year. During his later years, you would often find him reading, watching western movies, and listening to music. Homer grew up in the Cedar Methodist Church and was a member of Grace Evangelical Lutheran Church in Oskaloosa as an adult. At Grace, Homer served over the years as a Sunday School Teacher, President, Elder, and held several officer positions, and was a member of the Grace Lutheran Church Softball Team. He was preceded in death by his wife Alice, his parents, siblings (Max Ferguson, Loel Ferguson, Lois (Ferguson) Beaver, and Gene Ferguson), and several sisters and brothers-in-law. Left to mourn his death are his five children: Steve and Jan (Grefe) Ferguson of Alexandria, MN, Joe and Sharon (Vanderbeek) Ferguson, of Oskaloosa, IA, Jerry and Sondra (Ferguson) Van Der Pol, of Oskaloosa, IA, Wayne and Sue (Ferguson) Van Wyk, of Oskaloosa, IA, Stan and Carla (Ferguson) Eysink, of Pella, IA; nine grandchildren: Chad (Kris) Ferguson, of Alexandria, MN, Todd (Molly) Ferguson, of Moorhead, MN, Scott (Angie) Ferguson, of Carey, NC, Amber (Anthony) Ragen of Pella, Natalie (Jake) Nunnikhoven of Oskaloosa, Molly (Tim) Staroba of Highland, MI, Mathew (Amy Rowland) Van Der Pol of Broomfield, CO, Jeremy (Eric Riesberg) Van Wyk of West Des Moines, Jason Van Wyk of Westminster, CO; three step-grandchildren (Curtis, Lance & Kelly), 21 great-grandchildren, three step-great-grandchildren, extended family and friends. Homer’s funeral services will be held at 10 a.m., Wednesday, August 18, 2021, at Grace Lutheran Church, with Reverend Roger Neumann officiating. Burial will be in Highland Cemetery near Eddyville with Military Honors by the Oskaloosa Honor Guard. Visitation will begin at 11 a.m., Tuesday at Langkamp Funeral Chapel; the family will greet visitors from 4-7 p.m. Memorial contributions can be made to Grace Lutheran Church, the VFW., or Mahaska Health Foundation for the Serenity House.

Homer Clarence Ferguson passed on August 13, 2021, at the Serenity House in Oskaloosa. Homer was born on the family farm one mile west of Cedar to Carl and Ethel (Brubaker) Ferguson on December 10, 1924. Delivered by his Aunt Faye, he was... View Obituary & Service Information

The family of Homer C. Ferguson created this Life Tributes page to make it easy to share your memories.

Send flowers to the Ferguson family.