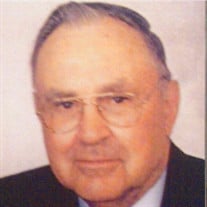 Howard Groenendyk, 86, of Oskaloosa and formerly of Cedar passed away Wednesday, January 31, 2018, at the Northern Mahaska Specialty Care Center in Oskaloosa. Howard Eugene Groenendyk, son of Cornelius and Jeanette (Meppelink) Groenendyk, was born July 15, 1931 in Oskaloosa, IA. He was a 1949 graduate of Pella Christian High School. After graduation he began farming with his father and brother on the family farm near Cedar. He was drafted by the U.S. Army and entered into active service, February 14, 1952. He served during the Korean Conflict and was discharged as a Sergeant, February 13, 1954. September 4, 1952, while in the service, he married Effie Jean Pleima in Pella. After his discharge, they settled on his family’s farm near Cedar where they lived for 49 years. From 1994 to 2002, he served as a Mahaska County Supervisor. He and Effie retired from farming in 2001 and moved into Cedar. Howard was a charter member of the Cedar Christian Reformed Church where he served as an elder and a deacon. He was also a member of the American Legion and the Disabled American Veterans Association. He served on the Oskaloosa Christian School Board and the Pella Christian High School Board. Howard cherished his family and was especially proud of his children and their accomplishments. Howard’s family includes his wife, Effie Groenendyk of Pella; his children and their spouses: Ronald and Judy Groenendyk of Oskaloosa, Russell and Linda Groenendyk of Downs, Kansas, Beverly and Wavern De Vries of Pella, Karen and Dan Broekhuis of Beloit, Wisconsin, and Kathi Groenendyk and Garth Pauley of Grand Rapids, Michigan; 15 grandchildren; 21 great-grandchildren; and a sister-in-law, Eleanor Groenendyk of Oskaloosa. Besides his parents, he was preceded in death by a daughter, Barbara Hol; a sister and brother-in-law, Carol and Martin Zylstra; a brother, Willis Groenendyk; and an infant great-granddaughter, Aliza Broekhuis. Funeral services for Howard will be held at 11 a.m., Monday, February 5, 2018, at the Cedar Christian Reformed Church with Rev. Tom Soerens of the First Christian Reformed Church in Oostburg, Wisconsin officiating. A family prayer service will be held at 10:45 a.m. before the funeral in the lower level of the church. Burial will be at 9:45 a.m. prior to service in Evergreen Cemetery near Leighton; Military Honors will be provided by the Oskaloosa Honor Guard. Visitation will begin at 10 a.m., Sunday at Langkamp Funeral Chapel; the family will greet visitors from 2-4 p.m. Memorial contributions can be made to the Oskaloosa Christian Grade School or the Pella Christian High School VO-AG program.

The family of Howard Groenendyk created this Life Tributes page to make it easy to share your memories.

Howard Groenendyk, 86, of Oskaloosa and formerly of Cedar passed...

Send flowers to the Groenendyk family.